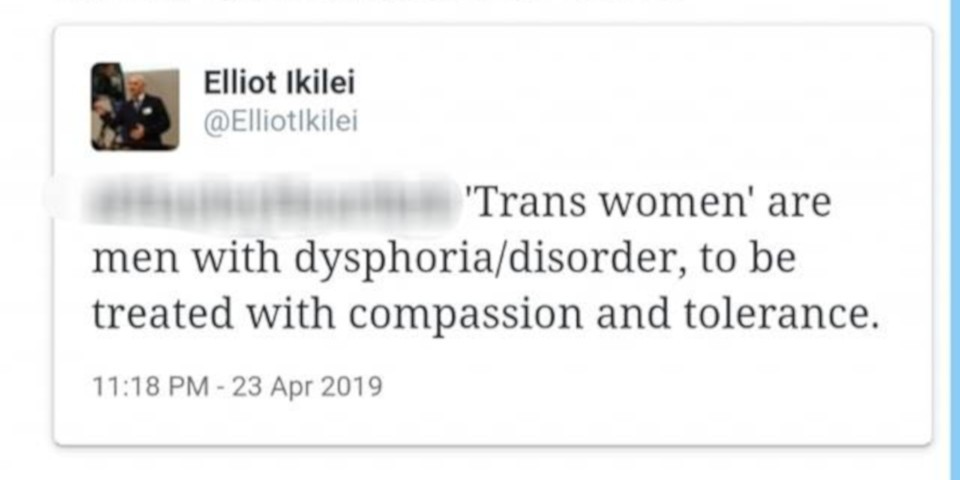 Last Thursday, Elliot Ikilei, the deputy leader of the New Conservative Party logged on to his Twitter account to find out he had been suspended from the platform. What was his crime? Did he say something harmful or dishonest?

Or is this another case of Twitters ongoing anti-conservative bias and purge of right-wing thoughts?

Wanting to treat "trans women" with compassion and tolerance is now hateful?

The New Conservative Party has been the only registered political party in New Zealand to speak up against the radical anti-reality ideology of cultural Marxism, and this is undoubtedly why their primary spokesman has been targeted.

Elliot sent me a copy of his appeal, but after nearly a week Twitter's support have not yet responded:

I respectfully submit that my tweet was not in breach of any standards; I stated the psychological condition that is defined in the DSM-4, then DSM-5, as Gender Identity Disorder (4), then Dysphoria (5).

I have then followed with the requirement that those with such a condition be treated with compassion and tolerance.

I submit that this Tweet is not in breach of any standards.

Until then, he remains locked out of his account, unless he does what Twitter wants: admit he's committed truthcrime and remove the tweet of his own volition.

"How many fingers am I holding up, Winston?"