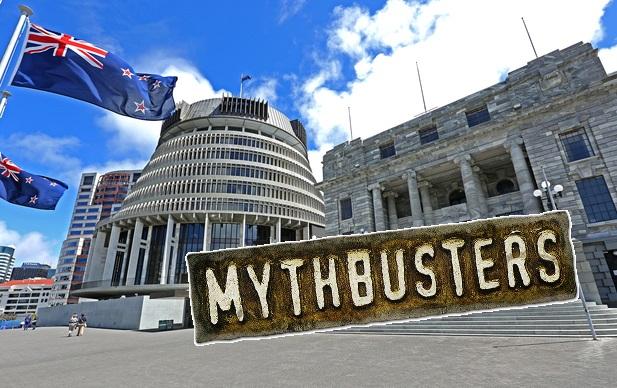 New Zealand politics is full of old stereotypes and mythology, but as we head into the 2017 election Right Minds NZ shines some light on some of the prevalent myths about New Zealand political parties and voters... Origin: In the late 1980s, when renegade National MP Winston Peters was at the height of his popularity, one of the key issues he would speak about was the introduction of a surtax on superannuation savings by the fourth Labour government, which the fourth National government promised to repeal but didn't.

This gained Peters considerable support from the elderly - particularly members of the WWII generation - who were a core voting bloc of the newly formed New Zealand First Party. The surtax was repealed after 1996, as part of the National - NZ First coalition agreement.

While by 2005, much of the WWII generation - who formed the original core voter demographic for NZ First - had passed away, Peters sought to win the support of the Silent generation and the soon-to-retire Baby Boomers by offering them the Super Gold Card.

Though it was clear that elderly voters were still being targeted by NZ First, the party did not make it into Parliament in 2008, and its return to Parliament in 2011 was done on the back of a different voter demographic.

Reality: According to the NZ electoral study and various other sources, New Zealand First actually has the second youngest core voter demographic of any political party. Only the Green Party boasts of having a greater appeal to young people.

Though the stereotype pushed by the media and others is of the average NZ First voter being an elderly white pensioner, a more realistic stereotype would be a young Maori who doesn't go to university.

While the Greens might rule on campus, young people who aren't on campus are more likely to vote for NZ First than for any other political party.

Origin: New Zealand appears to be the only western country where this isn't the truth, so it's no surprise that the stereotype has migrated to our shores. In the US, issues like abortion and gay marriage are fought along party lines, whereas in New Zealand these lines are blurred.

Furthermore, unlike Europe or the UK, whose centre-right parties have a long association with Christianity (the hint's in the name when you consider the "Christian Democrats"), New Zealand's main centre-right party, the National Party, has its origins in various classical liberal movements - including the remnant of the old Liberal Party.

And of course, when you look at the policies and leadership of the modern Labour Party, it's hard to imagine it being a party which would have any appeal to religious people. But you'd be wrong...

There are two likely causes for this: The first is that historically Labour did have a strong Christian base. Michael Joseph Savage referred to the introduction of the welfare state as "applied Christianity", Walter Nash was extremely religious and sympathetic to the temperance movement (hence his infamous "black budget" taxing alcohol) and Norman Kirk was a devout Catholic who introduced the DPB as a means to discourage abortion.

The second is that Pacific Islanders are an integral part of Labour's voting base - and they also happen to be more religious than most other demographics.

Myth #3:
"The rich are right-wing, the poor are left-wing"

Origin: Throughout most of the 19th and 20th centuries, there existed a class conflict between the "working class" proletariat and the "middle class" bourgeoisie.

This led to the rise of Labour movements, socialism and even communism and as such the battle line was generally clear-cut between the socialistic working class left, and the capitalistic middle class right.

By the 21st century, with socialism roundly debunked and defeated, and new conflict emerging between globalism and nationalism, the lines are far more blurred and the assumption that working class people will always vote for left-wing parties is no longer a safe one to make.

Reality: In New Zealand in 2014, National gained a higher share of the working class vote than Labour (38% to 35%), suggesting that working class voters are migrating rightwards. In fact that party with the largest share of voters in the "working class" income band of $10K to $35K is New Zealand First - while NZ First are not a right-wing party, they're certainly not left-wing either.

While Labour remain most popular among the "precariat", that is the voters with absolutely nothing whatsoever (the below $10K earners), their even further left-wing partners the Greens - despite being the only party to openly call for more and larger benefits - appeal to neither beneficiaries nor working class voters. In fact Green voters are almost as rich as National voters, and party is undoubtedly the party of the "urban rich".

Meanwhile on the far right, ACT - who are stereotyped as a party of the ultra-wealthy - actually have a surprisingly middle class, student-y voter base, being not nearly as wealthy as National or Green voters. Surprisingly, a large number of ACT voters fall into the "no income" bracket, although this is probably best explained as being the result of business owners making a loss.

All of the above suggests that income and social class are no longer as big a driver of voting habits as they were in the last century.

Bonus myth:
"The Greens are eco-friendly" Origin: You'd think a party called the "Greens" and who are constantly advocating for environmental issues would possibly practice what they preach and be that eco-friendly in real life wouldn't you?

Reality: The Greens appear to have more carbon miles per MP than almost any other political party. As much as I'd love to believe that the party spent $1,471,026 on electric minivans and bicycle rides to Wellington and back, we all know most of this went on air travel - although where and why remain a mystery.