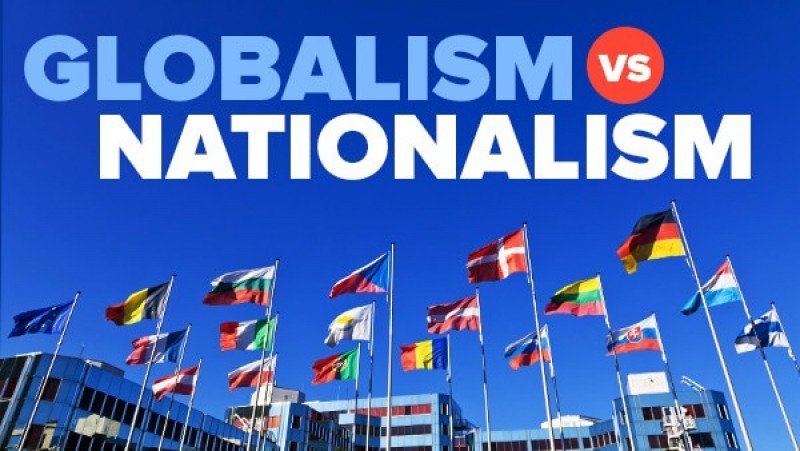 When I look at politics in the 21st century, I'm reminded of one of my all-time favourite quotes by Ronald Reagan: "You and I are told we must choose between a left or right, but I suggest there is no such thing as a left or right. There is only an up or down."

Although it's a line from a speech he gave in 1964, it's remarkably prescient and relevant to politics in 2017, perhaps even more so than it was in 1964.

I'm not sure about you, dear reader, but lately I've been having trouble working out what's left, what's right, what's centre, what's up, down and sideways.

The problem is that... that was the way things were in the 20th century when socialism was a real and looming threat, as opposed to today when things have gone so far to the extreme economic right that Rob Muldoon would be considered a socialist by today's standards. (The same Muldoon who wrote in 1985 that in his opinion Keith Holyoake went too far left in the 1960s. The same Keith Holyoake who was wary that Sidney Holland had dragged the National Party to the left. The same Sidney Holland who was a member of the radical free-market New Zealand Legion before becoming part of National. And so on.)

To qualify as a right-winger in this day and age, it seems you have to oppose government intervention so much that you border on being an anarchist - which is ironic as anarchism was basically the end goal of communism and Marxism. (See also: Horseshoe theory.)

What's your point? I never actually read the title and have no idea what this article is going to be about.

My point is this: Left and right are outdated terms, because the world has changed and the main divide in politics has changed.

On the left-right spectrum, socialism has been so roundly debunked that any form of regulated capitalism or even economic nationalism is now incorrectly referred to as "socialism".

As Muldoon wrote in The New Zealand Economy: A Personal View, since the 1980s "interventionism" has become a dirty word - and it seems to have remained this way up until the rise of Donald Trump, and perhaps this explains why the nominally right-wing Trump won over the formerly left-wing working class, while the nominally left-wing Hillary Clinton won over the formerly right-wing upper class (e.g. Hollywood and Wall Street).

So what is the new cleavage in politics if no longer left and right? It's nationalism and populism versus globalism and elitism.

Another way I've seen this described is as "open" (cultural liberal and globalist) versus "closed" (cultural conservative and nativist), a concept coined by Tony Blair - who famously blended left-wing social liberalism with right-wing economic liberalism to create the so-called "Third Way", or as he called it, "Open".

This new dichotomy has been most notable in Europe, in which normally left-wing working class voters are lending their support to "right-wing" nationalist and Eurosceptic parties, while normally right-wing voters are falling into line behind "liberal" and pro-European parties. An obvious example of this is the number of Labour voters who supported Brexit despite Euroscepticism being considered a right-wing cause.

An even stronger example of this is France, in which the two old parties - the Parti Socialiste and Les Republicains - were both roundly defeated in the first round of the French Presidential election in favour of Emmanuel Macron's "En Marche!" - a liberal, pro-European and "open" party and Marine Le Pen's Front National - a conservative, nationalistic and "closed" party.

More interestingly though, while FN were considered right-wing (or "far right" according to the media), the bulk of its support came from the working class - a core voter base for the PS. Likewise, Macron benefited from the endorsement of the Les Republicains' candidate Francois Fillon and despite being labelled as "centrist" or "centre-left" by the media, Macron was carried to Elysee Palace on the back of right-wing support.

This gets even more confusing when we consider the economic views of the two candidates, in which Macron was actually quite some distance to the economic right of Le Pen according to the political compass website.

A similar trend is notable when we look at the 2016 Presidential election, in which Donald Trump is considered slightly further to the economic left than Hillary Clinton, due to his opposition (and her support for) the TPPA and NAFTA. In spite of this, I don't know of many left-wingers who would support Trump, and I for one would certainly not consider supporting Hillary - and perhaps it's because we're voting now along lines other than economic left and right.

The role of identity politics

The 2016 election in the US appeared to be a clash of identity politics rather than a clash of economic views.

The two extreme groups were both arguably Identitarian in nature - the "regressive left", containing within it the LBGT movement, BLM and radical feminism clashed with the "Alt-right", which is best described as "identity politics for white males" and which formed effectively as a reaction to the identity politics of the left.

While New Zealand is, thankfully, nowhere near as extreme as in other parts of the world it could be argued that identity politics is going to play a huge role in this year's election. Labour and National, despite the campaign rhetoric of both parties, have almost identical budget plans and both subscribe to varying degrees of neoliberal economics.

Yet the issues that divide them this election seem to be mostly cultural: abortion is on the agenda, as is euthanasia, as is immigration (though somewhat surprisingly it's Labour who are on the anti-immigration side) and as is (as always in New Zealand) the Treaty of Waitangi.

I have two whole articles coming up soon regarding identity politics and also regarding Cultural Marxism so I won't go into detail here, but the crux is that it seems to be cultural and identitarian issues that are dividing what the political compass website describes as two economically right-wing parties.

Cultural conservatism and cultural liberalism transcend the left-right divide. As I wrote in a previous article, religious people in New Zealand are more likely to vote for Labour than National. And on the other end of the spectrum, it could be argued that David Seymour of the hard right ACT Party is actually the most culturally liberal politician in New Zealand - euthanasia and open borders are his calling cards after all.

One of the other big new divides in modern politics is between the populists - who believe that, basically, democracy is a good idea and the elitists who believe that that vulgar masses ought be ruled by a technocratic class who know best.

The 2016 Brexit referendum is probably the best example of this, in which it pitted an affluent political class supportive of the anti-democratic and technocratic European Union against a less affluent mass majority of Britons who believed that the people should have control over their immigration and trade policies - and indeed over the pressing matter of how curvy a banana should be.

One of the main reasons I self-identify as being on the political right is due to my belief that right-wing politics is generally more concerned about personal and individual freedom than the left, with the right's opposition to the scourge of socialism being the best example, as well as the fact that more recently it's been the right who have taken on the mantle of defending freedom of speech, standing up to political correctness, standing up for freedom of religion and even standing up to racism (especially here in New Zealand).

Unfortunately, conservatism and right-wing politics is more commonly defined by what it's against than what it's for: Historically right-wingers opposed all of the above freedoms as they stood against radical notions of individualism and liberalism that today we so vociferously defend.

With socialism no longer hugely relevant in the 21st century, the new big threat to freedom and democracy comes from elitism and technocracy - and as such most conservatives (excluding the stodgiest of High Tories), who view the utopian ambitions of globalist and anti-democratic technocrats with conservative scepticism, suddenly realise that they are in fact populists.

The Whigs and Tories Return

I've argued so far that this new political cleavage of open versus closed, cultural liberal versus cultural conservative, nationalist versus globalist and populist versus elitist is a new phenomenon unique to the 21st century. But is it really new?

One could make a very strong case that, actually, this marks a return to the old 19th century political cleavage: We are seeing a modern rerun of the "Whig" versus "Tory" dichotomy.

In the 19th century the Whigs were socially liberal and economically the then-equivalent of globalists. Like modern liberals, their support base was the middle class and they would occasionally throw bones to the working class to gain electoral support.

The Tories were socially conservative and economically protectionist. Although they were undoubtedly the party of the aristocracy and the old order, they actually had considerable working class support as the main beneficiaries of the long-forgotten concept noblesse oblige.

In the 19th century, the working class were effectively the deciders of who held power - the swing-voters, if you like, deciding whether to give their support to the middle class Whigs, or the aristocratic Tories.

The rise of socialism and labour movements in the 20th century changed this. Suddenly the working class had their own movement, while the Whigs and Tories became almost indistinguishable from one another.

Perhaps Open versus Closed is nothing more than Whig versus Tory in disguise?

This is the last paragraph, the article is nearly over trust me

Although I'm writing this article on a right-wing website, it's actually intended as something of an olive branch to the political left.

To them I say: Come and join us.

Because it's no longer about left and right, it's about freedom, nationhood and democracy and the fact that it is threatened and undermined by totalitarianism, globalism and elitism.

The things that most people value transcend the left-right divide, and so too do the people who threaten to take those things away from us.

We can't afford to be divided by 20th century politics when so much is at stake in the 21st century.