A Review of Clementine "Kill All Men" Ford in Auckland 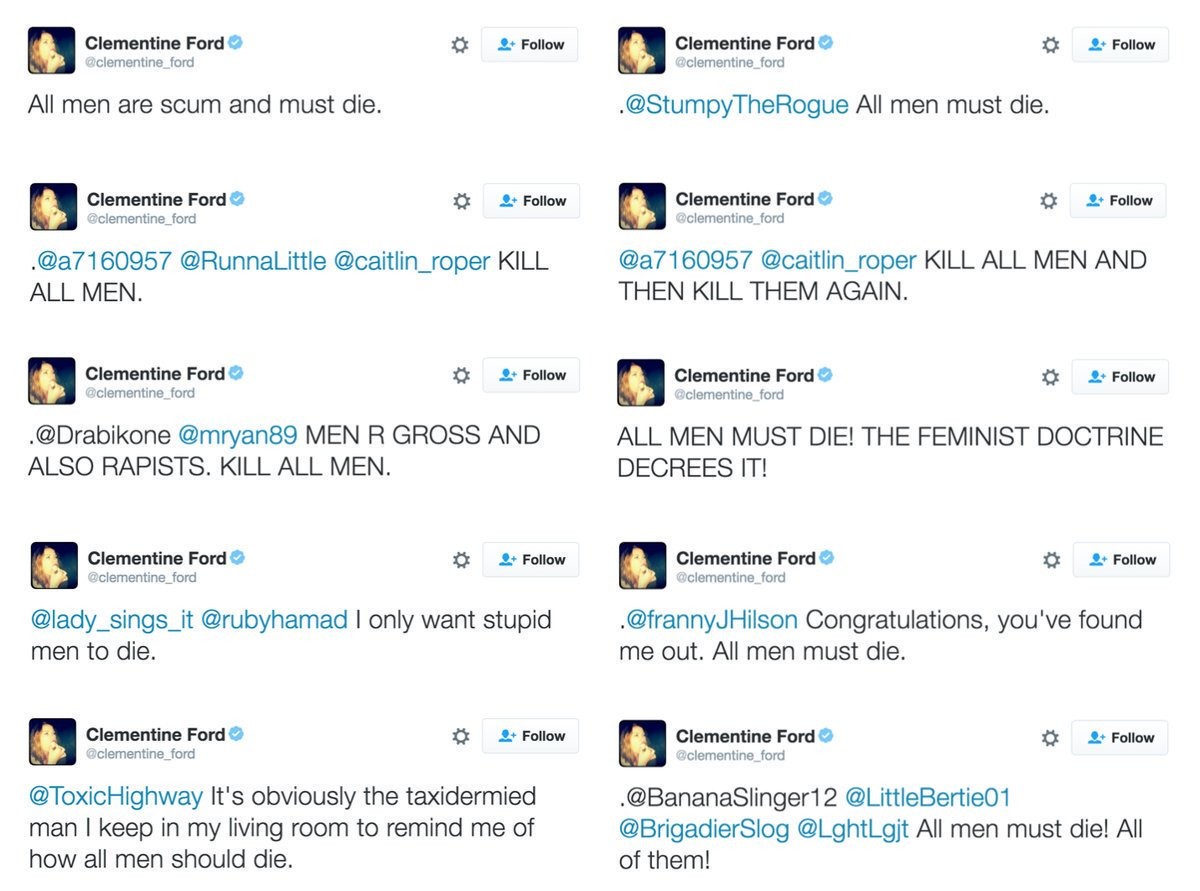 Watching the waves of audience members flocking down the street, I find myself gazing upon an eclectic, diverse array of 22 year-old, white, female uni students in hipster clothing, punctuated by a short haired feminist tank.

I myself am too obviously a non-feminist, so I will not make it past security. However, my sweater-wearing associate walks in unhindered. With his recording, I write this article.

Kicking off with a jab at MRAs (Men's Rights Activists), Clementine Ford apologises for the “sad man babies” protesting her speaking event at the Freemans Bay Community Hall.

Expressing concern for attendees who have no doubt suffered traumatic violence at the hands of men, and then having to walk past a “gauntlet” men “expressing themselves aggressively.” The horror.

"The good news is there [are] only three of them … as MRAs are very lazy.” Que uproarious laughter.

She puts on her manliest voice possible, and after fumbling her sentence and then blaming MRAs for her own lack of coherency, splutters out, mockingly, “what rights do men have that women don’t have?"

She launches into an explanation of what MRAs are motivated by, and of course, it’s because white men are losing their control on society. Specifically white, cis, hetero men. I suppose skin colour is extremely important these days.

"Their biggest grievance is that in the hierarchy of masculinity, they’re very low on the pole."

Ignoring that she just said that the men in power exert their power over the men lower down on the pole, hence MRAs.

Well imagine my shock, it turns out that MRAs are just getting all uppity, because they’re no longer allowed to rape and abuse women with impunity, you know, like the good old days.

No, it’s not because of persistent “jokes” like “kill all men”, “all men are rapists” and a third tired feminist slogan. Nor is it because right-wing speakers are loudly paraded as hate mongers until they’re de-platformed for attempting to spread “divisive speech”, while left-wing actual hatemongers are welcomed with open arms.

It's because we can’t oppress wamin. *Shakes fist aggressively.*

We’re then treated to a rant about Milo Yiannoupoulos, and after accusing his followers of appealing to identity politics any time the gay, Jewish husband of a black man says something that could be construed as homophobic or racist, she offers a defence as to why she refused to debate him.

*A quick pause from the event host to remind anyone who feels triggered that they can leave the room and recollect themselves.*

She then talks about “Roosh”, or Daryush Valizadeh, a blogger and pick up artist.

According to Clementine, Roosh is responsible for breeding a whole new generation of rapist, and young teens reading his blogs are bound to look at the changing landscape and assume “something has been taken from them.” (Remember the whole “men aren’t allow to oppress women anymore” thing.)

“It’s the feminised legal system and soy boys and cucks and white knights” she mocks, “They’re one step away from incels.”

If I didn’t know better, I’d assume that Clementine doesn’t trust men enough to let them watch and read controversial opinions and not be influenced by them, but that can’t be.

She’s a liberal after all.

Next we cover rugby and league teams having sordid “bonding experiences” involving multiple men with one woman. Here’s where it gets interesting though, because she then goes on to expose and criticise rape culture in Islamic countries.

After covering very specific cases where women have, after the fact, decided to report the incident to the police as a rape, she mocks men defending themselves against rape accusations by claiming the incident was consensual.

“I’m not a rapist” she proclaims mockingly, chalking that sentence up to “things rapists say”.

“They always say it was consensual don’t they?” she says in disgust.

This is actually a brilliant point, because as we all know, the strongest defence against rape accusations is to fully accept the charges and not claim for a second that it was consensual.

She offers up clearly bogus stats on sexual assault, and uses them to justify her next spiel. I’ll save us the time and allow you to look up any number of videos debunking the mythical figures that are always offered up as a baseline for the arguments of feminists talking about rape culture.

Rest assured, there is nothing new that Miss Ford offers us on this topic.

Finally we get to questions from the audience. Someone raises Jordan Peterson as a topic, noting his interesting material.

Clementine’s response is golden. “The best thing I’ve heard about him is that he’s a stupid person’s smart person.” Realising she probably offended her questioner, she back pedals slightly. “It’s not to denigrate you at all, It’s just something I … read about him …”

Not one to dilly dally, she’s quickly back beating the cis, white male horse, and their losing grip on power, and needing to assert their dominance.

“I haven’t read 12 rules for life, maybe I should, I just don’t care about him that much.”

She straw-mannishly misrepresents Peterson on how he says top level jobs are extremely stressful, implying of course that what he’s actually saying is that women should just stay home and have babies. A famous Peterson quote, I’m sure.

The questioner suggests to watch his YouTube material instead.

“Oh GOD, I CAN’T watch his YouTube stuff! I think someone can be an extremely persuasive speaker and say nonsense.”

Wow, I could not have ended this with a better quote, Clementine. You really hit the nail on the head there.

If only she knew.