When the New Conservatives initially debuted, I was sceptical. I even called them boring, yet they've been working overtime to prove me wrong. Most recently they've received the attention of Martyn Bradbury from the DailyBlog. He's been getting a bit worked up about the New Conservative's social media presence:

The alt-Right New Conservatives who are organising the anti-immigrant February 2nd protests  have entered the culture war with gleeful abandon.

The New Conservatives are Alt-Right because they hunger for political violence and use divisive language to bolster that rhetoric. There are common alt-Right speaking points which are aggressively xenophobic, transphobic, white pride and claims that global warming are a hoax.

Scary. But is any of it true? (Spoiler alert: no.)

First up, the New Conservatives aren't the ones organising the rallies against the UN Migration Pact – that's being done by Jesse from NZ Sovereignty, and I know for a fact that he isn't a member of the NC. Secondly, these are not "anti-immigrant" rallies - the UN Pact is about facilitating illegal immigration and a host of other dangerous policies.

He's wrong about characterising this economically-centrist, socially-conservative party as "alt-right" – the scary boogeyman devoid of any meaning at this point. As we will see, it's supposed to make you think "oh no, the Polynesian guy running their social media is literally Hitler riding on a dinosaur!"

The one thing he does get right is that the New Conservatives are happy warriors entering into the culture war with great energy and enthusiasm.

First there is the naked Transphobia…

Apparently pointing out that sexual assault is more common in unisex facilities somehow means you have an irrational fear of the mentally ill.

This post clearly isn't about confused men assaulting women in women's bathrooms – this is about any sexual predator being able to waltz into the bathroom of their choice without any questions asked and no paperwork required.

The picture rightly points out – if we let any man who feels like it into women's bathrooms (as most of these "bathroom bills" do) then we can expect to see a vast increase in sexual assaults in (what Bradbury himself acknowledges as) women's spaces. He wants to discuss "trans rights without the hatred" – but as the "TERFs" have discovered: that's not allowed on the left anymore.

…then there is white pride…

The hysteria on this one is golden. You're not even allowed to point out the hypocrisy of left-wing racial identity politics anymore. The NC condemns the Marxist ideals of ethnic pride while pointing out the racist hypocrisy of it – and gets called racist.

Seeing that most New Conservative media posts are made by someone who is not white, this reminds me of a story in this week's news where an American conservative radio host, who happened to be black, was told by a CNN analyst that he held his job only due to white privilege and the colour of his white skin. You can imaging the awkward silence, followed by internal alarm-bells and back-pedalling that followed the host's reply: "I'm black".

…then there is climate change is a socialist hoax propaganda…

Personally, I think that "climate change is a socialist hoax propaganda" nails it, but the Facebook post doesn't mention socialism or hoaxes.

New Conservative policy is to simply stop sending money raised by the ETS overseas and to put it into local research and development instead – a far cry from "climate change is a hoax".

Bradbury says that we need to discuss immigration, but without hysteria. Yet, he simultaneously dismisses anyone who might be opposed to whatever the UN has planned for us in their normalisation of illegal migration. This is hypocritical, to say the least. Bradbury apparently wants to talk about immigration, but only within the guidelines provided by the United Nations.

He ends the spiel with a minor departure from the "alt-right" moniker to call the New Conservatives "fundamentalist Christian" and then posts a picture of Hitler riding a dinosaur. If my house wasn't already full of paintings depicting Prussian cavalry charges, I'd consider printing that out and framing it.* 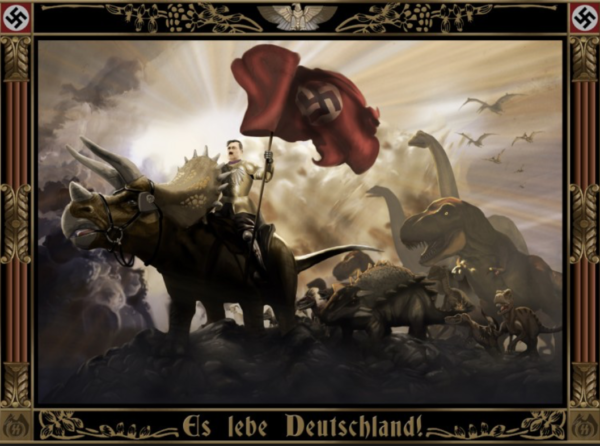 I've got my own little image for Martyn the hysteric:

Why is Martyn Bradbury so afraid of the New Conservatives? A few days earlier he wrote:

My fear about identity politics wokedom has always been the political backlash by those trying to pay the bills hearing alienating cultural engineering rather than their economic well being articulated.

His own hysteria is based in the realisation that the chickens have come home to roost.

Marxists have invested decades into identity politics and wokedom – now they're worried the working class is coming to get them. The irony.

*For the woke, that was a joke.

Don't forget: there are nationwide rallies calling for withdrawal from the UN Migration Pact on Saturday 2nd February at 4pm – see you there.