What Was the High Commission Doing at the EFF Manifesto Launch? 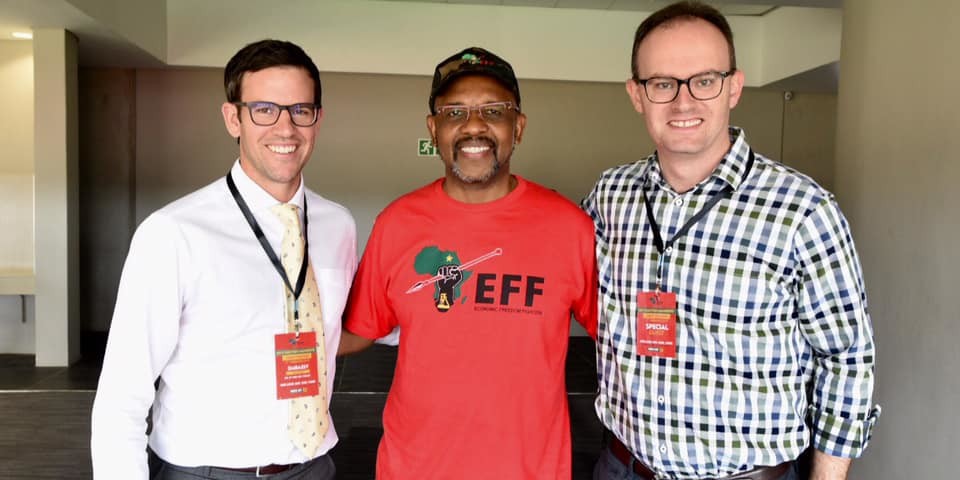 The photo posted on the "Economic Freedom Fighters" official social media page claims to show one of their spokesmen with representatives from New Zealand's and Australia's High Commissions to South Africa. The EFF launched their 2019 Manifesto last week, kicking of their campaign in the elections that will take place later this year.

Like the ANC, South Africa's ruling party, the EFF support land confiscation from the ethnic white minority. They then take it a few steps further with calls for complete land confiscation and the singing of songs about murdering white farmers.

Their leader, Julius Malema, was convicted for inciting violence in 2011 with his "Kill the Boer" song. Last year, Malema responded to a question about whether he was responsible for organizing gang members to murder white farmers by saying "Maybe. Maybe not."

At the campaign launch last week, Julius Malema led his supporters in their signature chant, broadcast live on South African television. "Shoot to kill" and "Kill the Boer, the farmer" are the main lines. To avoid criminal prosecution he replaced "kill" with "kiss", but the rest of the lyrics and hand gestures tell a different story.

Julius Malema outlined his vision for the country at the event:

"The economy is in the hands of the white community, we want to change that," he told the crowd to cheers and raised fists.

"We are going to place all land under the custodianship of the state, for equal redistribution to all," he pledged.

I rather doubt that very many, if any, of the currently living white landowners are rapists or murderers – they tend to be on the receiving end of both those crimes.

Through their policies, EFF want to emulate the mass-murder that communist regimes have globally wrought over the past century. The majority of their victims won't be white either, as countless millions of blacks would starve to death in an economic disaster worse than Mugabe's Zimbabwe if their manifesto were to be implemented.

All of this leads us to one simple question:

Who thought this was an appropriate event for a New Zealand representative to attend?

Neither the High Commission to South Africa and the Ministry of Foreign Affairs have responded for comment at the time of publishing.

The New Zealand National Party have openly condemned the South African government's plans for land confiscation from white farmers, as have ACT and the New Conservatives.

The Economic Freedom Fighters are South Africa's third largest party and received 6% of the vote last election. They are currently polling at around 10%.