The Truth About The Resurgence of New Zealand Nationalism 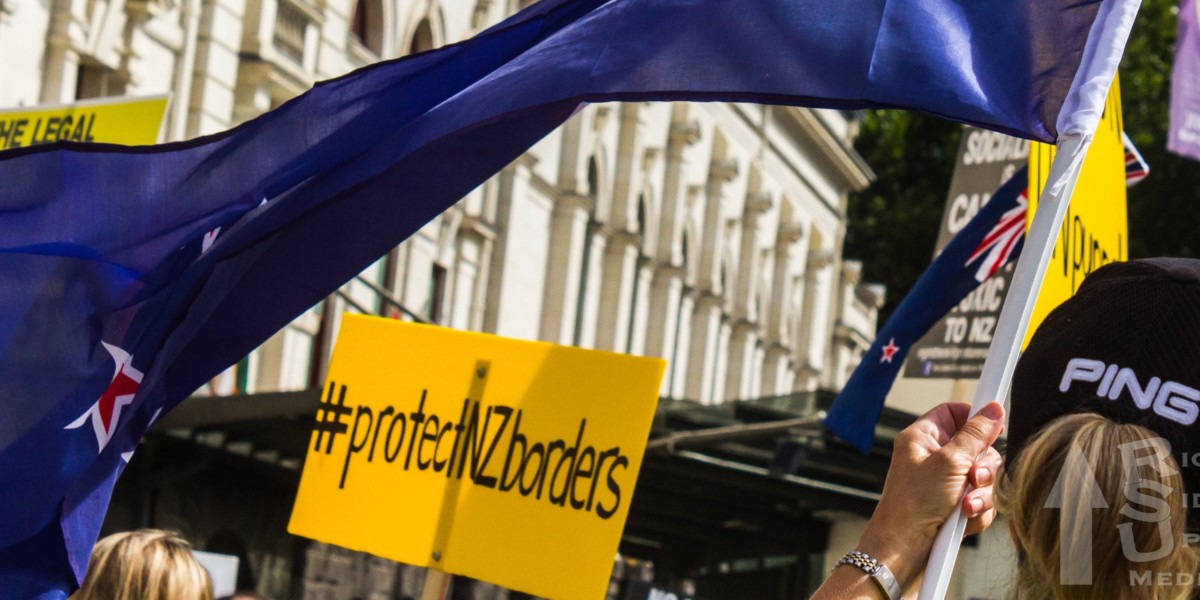 What was supposed to be an exposé of New Zealand's "far-right nationalists" by Spinoff guest spinster Marc Daalder turned into something of a bizarre mess. I talked with a few of the people he supposedly interviewed and only a single quote from anyone was used. This is a classic case of a "journalist" wanting to write a hit piece, finding all evidence to the contrary, and then writing it anyway. On the Spinoff the article is titled The furious world of New Zealand’s far right nationalists. (Fuhrer-ious, get it?) On Newshub it appeared as An exploration of New Zealand's far-right nationalist movement. The latter used a picture of American tiki-torch wielding neo-Nazis as the thumbnail. Scary.

Are we missing the rise of the far right? Marc Daalder speaks to the angry middle-aged men who want to see nationalism rise in New Zealand.

Marc proceeds to not actually talk to any angry middle-aged men.

Hundreds of Kiwis have pledged to march today against an obscure UN migration pact today under the guise of a brand-new organisation calling itself NZ Sovereignty.

Opposition to the agreement first emerged on sites like the alt-right website Breitbart and neo-Nazi website Daily Stormer which warned it would “Bring 60 Million Brown People to Europe”.

By the end of the first paragraph, Marc Daalder has morphed into Winston Peters. This comparison is like saying veganism should be opposed because Hitler was a vegan. (Which is also a real thing.)

As we will see, the word salad of unrelated keywords is no accident, it's a form of digital lynching. Search for anyone or any organisation named in the hit-piece, it will show up as the most recent (fake) news item for that person in Google News. It's not at all funny to be on the receiving end of.

I was going to do a detailed breakdown of the article, but Marc can't keep his definitions straight and shifts between "far-right", "alt-right", and "neo-Nazi" on a whim. An obvious attempt to make these synonymous in the minds of his readers. If I broke everything down line-by-line with quotes, this rebuttal would be the size of a small novel, so use one of the links above to follow along if you don't believe me.

I'll start by cutting through the fat and providing a bullet point list of everyone who gets called "far-right" or "alt-right" in the dishonest hit piece:

If you haven't won your game of bingo yet, here are a few more words that appear in the article: "hegemony", "crusades", "crusaders", and "Heil Hitler". If only "global warming" and "Alex Jones" were mentioned, then we'd have a perfect score.

The author, Marc Daalder, has only written one other article for the Spinoff, and while I won't make any comments about his beta appearance, it's clear from his profile that he's spent most of his time in American elitist strongholds rather than New Zealand. He highlights having written for a bunch of sites, including one called the The Jewish Daily Forward . This stuck out to me because the word "forward" is usually connected with a certain insidious ideology.

Indeed, some quick searching yielded that the organisation is a Communist and anti-Zionist newspaper that was renamed to The Forward in 2015. They halted their print editions in January this year and 40% of the staff were laid off. (Maybe we'll be blessed with more articles from Marc the Marxist in the coming months if he's come back home to look for work.) I checked a few more of the outfits he writes for and they tended to be to the left of the Spinoff (that might be an accomplishment).

The article was passed off by the Spinoff and Newshub as some kind of unbiased investigative journalism, a clear deception since the author is an open left-wing activist.

The primary source cited in the article is a Professor Paul Spoonley from Massey University. He's supposed to be some kind of "alt-right" expert. (No definition is provided.) The only people Spoonley ever comments on seem to be regular libertarians and conservatives, which makes sense since his university has a reputation for being against free speech for right-wing speakers.

Spoonley says he sees two possible constituencies for the far-right in New Zealand: disaffected people and the conspiratorial-minded.

There is an element of truth to the first group Spoonley identifies as being drawn to nationalism (we can assume that's what's meant by "far-right"). Those harmed by cheap immigrant labour, and those who see their traditions, history, religion, and culture under assault from the Marxist ideology.

From there the article descends into the bizarre:

There is, however, a section of New Zealand society that is vulnerable to the far-right but is not yet inherently left- or right-wing. This is the second potential constituency that Spoonley sees. He calls them adherents of “new wave conservative conspiracy politics".

He then goes on to treat every weird conspiracy under the sun as some kind of insight into the "far-right" and uses examples of left-wing environmentalist terrorism as a pointer of how dangerous the "far-right" can be.

One of the next things that Marc mentions are secret codes used by "white supremacists" and "right-wing extremists", saying that understanding these are the key to understanding the "far-right". In doing so he claims that the use of "globalist" is often a euphemism for Jews. Now, we've all come across a few people who believe this, but they're not hiding behind codes. To the best of my knowledge, all of the people named in the article have a pro-Israel stance. These insinuations are open slander.

What's the primary concern of Jews in the west? Islam and the left. In the UK, Labour is in the midst of an anti-Semitic scandal and across the Atlantic we can see similar problems in the US Congress with officials like Ilhan Omar, et al, who have electoral viability due to concentrated Islamic constituencies. Here in New Zealand our top (known) anti-Semitic imam was breaking bread with the Manukau Police last year. When I pointed it out, they deleted their social media posts without comment. Oops, how Islamophobic of me.

The only quote used in Marc's article from anyone in the new nationalist movement is the following from Jesse Anderson:

"We have no tolerance for racism, for sexism, for any of that. If we see anyone who is expressing awful views, we will ask them to move along,” he vowed. Anderson later added, in response to questions about NZ Sovereignty’s political leanings, “I don’t see patriotism as right-wing, I don’t see nationalism as right-wing”.

Why does New Zealand need a dedicated non-partisan nationalist movement? There are those who believed the lies of Winston Peters' "New Zealand First" mantra and are in need for something more reliable. There are those who are sick of the National Party's devotion to Communist China—the same could be said of Labour. There are those tired of racial separatism, division, and grievance politics pushed by tribalists. There are those fed up with the United Nations overruling our clear national interests and sick of seeing their Marxist agenda implemented step-by-step here.

Nationalism (hand-in-hand with capitalism) beat out International Socialism in the latter half of last century. Sadly, many of those true believers in Marxism have infiltrated our public institutions and think that they're just one more mass murdering experiment away from utopia. Nationalism is what stands in their way.

What's the model for nationalism today? If you had to list the top nationalist success story from the 20th century, Israel would be at the top, or near the top, of that list.

When it comes to being strict on immigration, to the point of turning away economic migrants, to border walls and enforcement, and to being hated by the globalist United Nations, Israel leads the way.

Of course, Israel isn't the only fresh nationalist success story. Switzerland has managed a stance of strong national unity and even neutrality for a long time. Singapore went from race riots and mud huts to one of the most powerful world economies in a single generation. Japan and Korea roared back after devastating wars.

New Zealand can reverse her decline and become great again if the people can regain the confidence and productivity lost to the progressive globalist agenda.

All people should be allowed to maintain the policies and identities of their homeland without having international bureaucrats determine what they can and can't do.