Dave Pellowe brought his Church & State Summit to New Zealand for this year, the third year it's been running. The mission of the organisation is "to help Christians first be better informed about the Biblical basis for political involvement and to then be better involved in providing the imprimatur for justice and wisdom in government."

The keynote speaker was Dr Michael Brown from the USA, but due to an administrative error with his visas, he was unable to make it to Auckland in person. He did tape two great speeches that were played to the audience, and Dr Brown has a style that made it feel like he was there in person.

Alan Vink was the master of ceremonies, offering thoughtful remarks throughout the conference, especially some aimed at fellow pastors in the audience. Family First director Bob McCroskrie was there to provide information on the cultural and political issues facing the country at the moment, ones that the church should be actively involved in. There were several other local ministries represented, including Thinking Matters who also run a great yearly conference, "Confident Christianity".

The roster was rounded out by Paul Moon, professor of history at AUT. This gave the conference a good broad base of pastors, activists, and academics from a number of denominational backgrounds.

Dave Pellowe gave a good introduction around the aims of the conference, its non-partisan nature, and how Christians should never take their votes for granted in complacent support for any one party. It was great to see that both Dave and Alan mentioned the abortion holocaust and murder of tens of thousands of our fellowcitizens as the greatest moral issue facing the nation, and Dr Brown touched on this and the sacrificial nature of the practice in his closing remarks.

Dr Brown's first speech covered an overview of cultural issues that the church should be informed on and engaging with, with a heavy focus on issues of sexuality and identity. He drew on his own youth as a self-described "LSD-taking Jewish punk rocker" and how he engaged with apologetics from the age of 16, right after his conversion. "Reach out with compassion. Resist with courage," was the core of his message. Bob later pointed out that "Reach Out And Resist" makes a good acronym: ROAR.

An interesting study Dr Brown highlighted was that 90% of pastors believe the Bible speaks authoritatively on every issue facing our culture today, yet only 10% preached on it. The excuses they cited were being worried that attendance would drop and tithing would decrease if they were "too controversial". The irony was increased by the fact that a similar 90% of congregants wished their pastors would teach more about cultural issues. He ended with a few minor references to eschatology and then asked "what kind of a world are we leaving our children?"

That got me thinking, as I know most of the local churches here are dispensational premillenialist in their outlook. (I'm covenantal postmillenialist, in case regular readers hadn't guessed that already. I'm told it bleeds through rather obviously in my writing.) The point of the issue is as follows: when churches teach that "everything is getting worse, but that's fine because Jesus is coming back tomorrow," the end result is Christians withdraw from the culture. Even unintentionally or subconsciously. The degradation of society and degeneracy is not resisted as it aught to be, because church-goers think that's what's supposed to be happening. I wasn't the only one thinking about this topic, as Alan Vink made some references to it right after Dr Brown's session and then Dave Pellowe gave a great anecdote: Martin Luther was once asked what he'd do if he knew for sure that Jesus was returning tomorrow. He purportedly responded, "I'd plant an apple tree." Encouraging such a shift in people's thinking and outlook might be possible without addressing the complicated subject of eschatology at a non-denominational conference, but it was an elephant in the room.

The excellent opening was followed by a mini-Q&A between Bob McCoskrie and Alan Vink. Bob talked about what Family First was doing with regards to legislation and referenda facing the nation right now. Abortion, assisted suicide, recreational cannabis, pornography, sexuality, and transgenderism were all covered. Bob seemed to think that we're about as far down the track as the USA and other countries when it comes to threats to freedom of conscience. Christians are at a very real risk of losing employment over many of these topics and at a later Q&A there was some good advice about the need for prudence and legal test cases. The hostility of the media to Christianity was also raised. 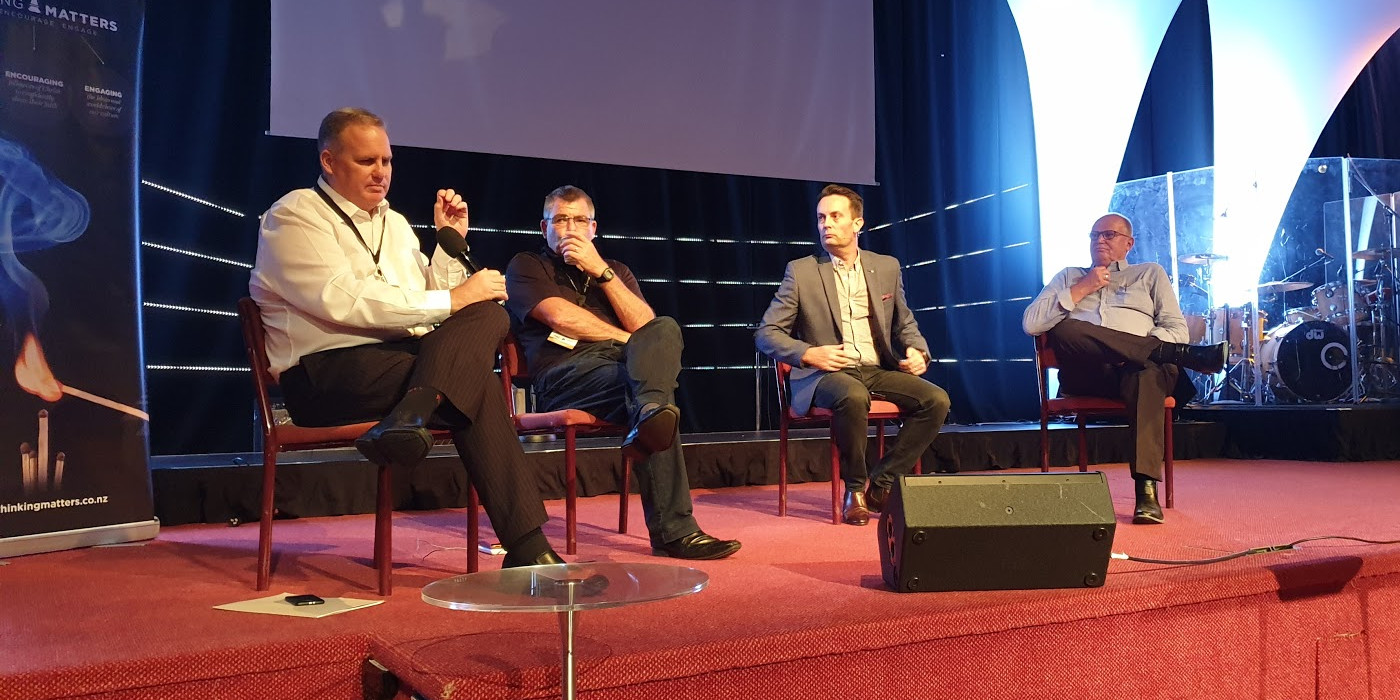 Later in the evening, there was a further update from Nick Tuitasi who is working with Family First. He spoke specifically about the work they were doing with local Pacific pastors to wake the community up from the damage that Labour was doing to the moral fabric of the country, and that their votes should not be taken for granted. He had a few funny lines about how God sent the Samoans to New Zealand eighty years ago because he knew that they'd be needed to save the country in 2020. He highlighted how the missionaries had anchored the island cultures to the gospel and that the Pacific Islanders should do more to become that anchor for New Zealand. He was heartened to see a number of Pacific pastors at the conference. The "political, but not partisan" nature of the conference worked well here, and the focus is that Christians shouldn't be complacent in their support for party, but need to use their votes wisely to support candidates that promote justice and peace.

The next main session was from professor Paul Moon, on the topic of "Where is free speech headed?" I was very interested in how he would fit what is perceived as an entirely secular topic into the "Church & State" theme, but Paul did not disappoint.

To avoid this review from running too long, come back in a few days for Part 2 on dealing with the problem of "hate speech", and then likely a Part 3 that will focus on Dave Pellowe's exhortations for the church to "build the wall" and Dr Michael Brown confronting the "spirit of Jezebel" — all sessions that deserve some extended commentary.

CAS will be back in Auckland in 2021, and I am already excited to attend again.