This article appeared first on Eternal Vigilance. It has been edited and formatted for clarity and has been reproduced here in two parts with permission of the author. Read part 1 here.

Why did the maniac choose to come to New Zealand to shoot peaceful Muslims instead of going to Syria and shooting real Islamic terrorists? Because, though he maybe consumed with hatred, he is not insane. He knew our socialist state has disarmed our Muslims and did not fancy the idea of having his victims shooting back!

Up until this cowardly atrocity happened, its most likely that New Zealand Muslim migrants would have had little concerns about being disarmed by the New Zealand government, and many of them probably bought into the delusion that this law has a lot to do with why New Zealand is so much ‘"safer" than many of the places they have escaped from… yet that is not the case at all!

What causes New Zealand to be a safer place is not our gun restrictions, but our policy of tolerance and relative religious liberty that comes from our enlightened and founding Protestant culture.

And Muslim immigrants have taken full advantage of this liberty and tolerance we enjoy here in this country to maintain their Islamic faith and community, and they are practising this tolerance of others too. This is the foundation of peaceful co-existence in a free society made up of disparate groups, each following their own conscience and peacefully worshipping God as they believe is right.

It's this tolerance, and respect for the religious liberty of others that makes New Zealand such a great place to live for everyone. 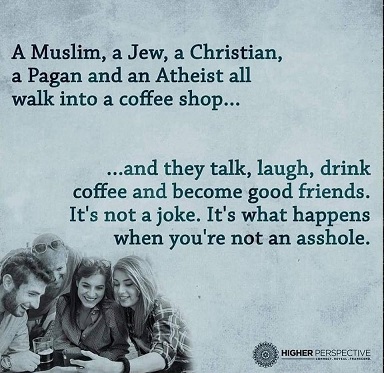 In this sense New Zealand has been an example to the world that freedom of religion works and that Muslims, Christians, Jews, Atheists, and Hindus, can all live together in the same communities to mutual benefit, based upon the common values that we all want to be safe in our lives and property, and be free to follow our own values while respecting the rights of our neighbours to do the same.

Yet even though by far the majority of New Zealanders, both native and new arrivals are tolerant and peaceful, there will always exist a tiny number of psychopaths and maliciously warped minds liket his freak who has cause our nation such a horrific wound.

The lie that socialist politicians continue to pedal—and the delusion of the timid sheeple who worship the nanny-state and vote for them—those who have no concept of the value of freedom or self reliance is that socialist nanny-state can keep us all safe, if she is allowed to take away more of our rights and liberties.

This is not only a dishonest lie that renders us all sitting ducks… it is also a childish fantasy!

It's the children’s fairy story about a utopian world where folk have no need of guns. Where there are no bad people who disobey the laws and don't make guns or bombs. Where the government and police are angels and never act tyrannically or unjustly.

This is not the world we live in, children!

This is the type of childish thinking that refuses to see that though we have relative peace and liberty, and religious tolerance, that places like mosques, churches, and even schools, should be allowed to have armed guards, and that it should be no big deal for ordinary people to carry the means of defending themselves.

I know that that last comment will have the sheep absolutely bleating!

Yet it is their sheepish terror that refuses to acknowledge *The real world truthfulness* of what I have said… and they want to cling to their fantasy that a disarmed population can be kept safe from this sort of Terrorism by Nanny state!

It has been reported that it took police 36 minutes before they engaged the terrorist from when they were first notified there was an active gunman on the loose, and by then nearly 50 people were murdered and dozens more seriously injured. [Editor's note: the police were on the first scene after 5 minutes and it took just over 20 minutes to apprehend the shooter, slightly faster than initially reported.]

That we are talking now about semi-autos—not full automatic machine guns (which have already been banned)—is a testament to the creeping socialist agenda to ban all privately owned guns and leave only the State with firearms!

This is why the founding fathers of American freedom enshrined the second amendment and why tyranny loving socialists Democrats in the USA are hell bent on abolishing the 2nd.

The truth is, this terrorist attack against peaceful worshippers and immigrants proves we New Zealanders have lived in a socialist dream bubble that has burst.

The root cause of this terrorism is not too many guns, but not enough and it should become the norm that we have armed guards and the more gun rights — generally speaking.

This is the reality pill that so few sheepish are willing to swallow and why our naive and simpleton woke SJW Prime minister has already announced that semi-automatic firearms will be outlawed! This was a 100% predictable knee jerk reaction from her. I knew this would be her plan as soon as I heard about this crime, as it is textbook for socialist liberals to use events like this to further empower themselves and take way the rights of millions of law-abiding people under the pretext of public safety. To try and keep the idiots believing the myth and maintaining the charade that "nanny will keep us safe", even though this Terror attack proves the lie!

Semi-automatic guns are the mainstay of hunting in New Zealand. They are tools… not "weapons"! And we cannot allow our virtue signaling woke SJW PM to make New Zealand a laughing stock to the rest of the world and an even more attractive destination for foreign extremists to commit these atrocities in the future!

Our Nation is rapidly being effeminated by the insanity of lefty liberalism. It was only last century that New Zealanders were renowned for their martial excellence distinguishing themselves in two world wars and that our enemies were very wary of our nation because we were known to be a nation of fearless warriors and proud gun owners who knew how to use them, and taught our children how to use them too.

That is the sort of mindset that would make our country far less attractive to cowardly terrorists! The very opposite message of what our foolish PM is broadcasting to the world. Wake up New Zealand! 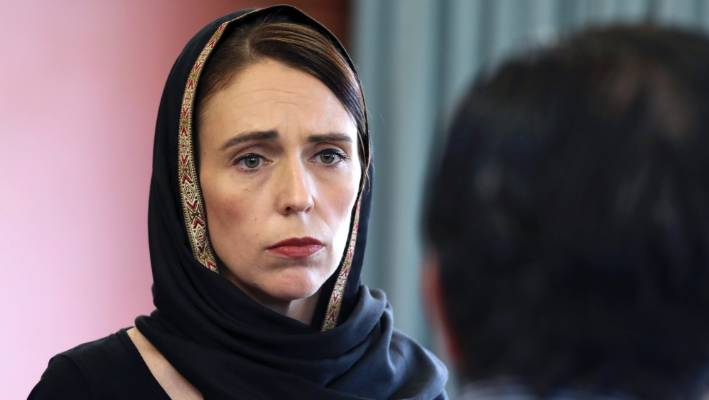 Well thankfully we do not yet live under her dictatorship, so thankfully she does not have the authority to impose such an extreme and tyrannical law upon us, and New Zealand still has a strong hunting and gun ownership community (50,000 guns were imported into the country last year), and I am hoping New Zealander rally and publicly demonstrate against this new and absurd and extreme gun regulation proposal. I have high expectations that Jacinda Ardern will fail.

Muslims and Christians, schools and even Liquor stores and dairies need to look to their own security, and the government needs to roll back regulations that hinder these places from being able to bear the means of self-defense against dangerous criminals who already flout the law!

I have read that the guns used in the Christchurch terrorist attack were illegally obtained and so why would any fool think that passing more laws is gong to hinder these sorts of fanatical criminals? [Editor's note: since this was originally written it has been revealed they were legally obtained due to vetting failures and later illegally modified.]

Stop being gullible idiots to the delusional failed tyrannical prohibitions of simpletons in parliament.

On the one hand while our PM basks in the limelight as the next messiah, donning a hijab, hugging people, promising to cover the funeral costs of the victims, and other financial assistance, her minions in the NZ police were busy trying to suppress New Zealanders from viewing and sharing footage of the attack.

See: Christchurch mosque attack: Up to 14 years’ jail for video sharers as Commissioner asks Facebook to give police names.

This grotesquely heavy handed suppression of the truth is barefaced (il)liberal tyranny!

Of course, the NZ government and police don't want people to see the truth of their failure to keep New Zealanders safe or for any sudden enlightenment to break out that the government are partly responsible for the death toll because they have disarmed us all by law leaving us exposed to criminals and terrorists.

They don't want New Zealanders to be shocked into demanding their rights back to concealed carry of side arms for their own defense!

So this is about suppression of truth for the sake of the political agenda of the powers that be and the agenda they seek to further impose their plans for more heavy-handed gun regulations.

When the evil was raging in Christchurch, many heroic deeds and exploits were done in the face of this monstrous crime!

So called "toxic masculinity" was on display in all its glory. Men gave their lives attempting to stop the gunman. Fathers took bullets shielding their children. Others took grave risks to aid the injured.

It is the height of foolishness to think that any new measures—any new prohibitions—can grantee such atrocities never happen again in the future!

The best you can hope to achieve is a well armed and proficient citizenry who are ready and capable to look to their own defense.

Lets not let the terrorists or the tyrants win.

Lets up keep our rights and liberties, and our toleration and respect for the rights of others.