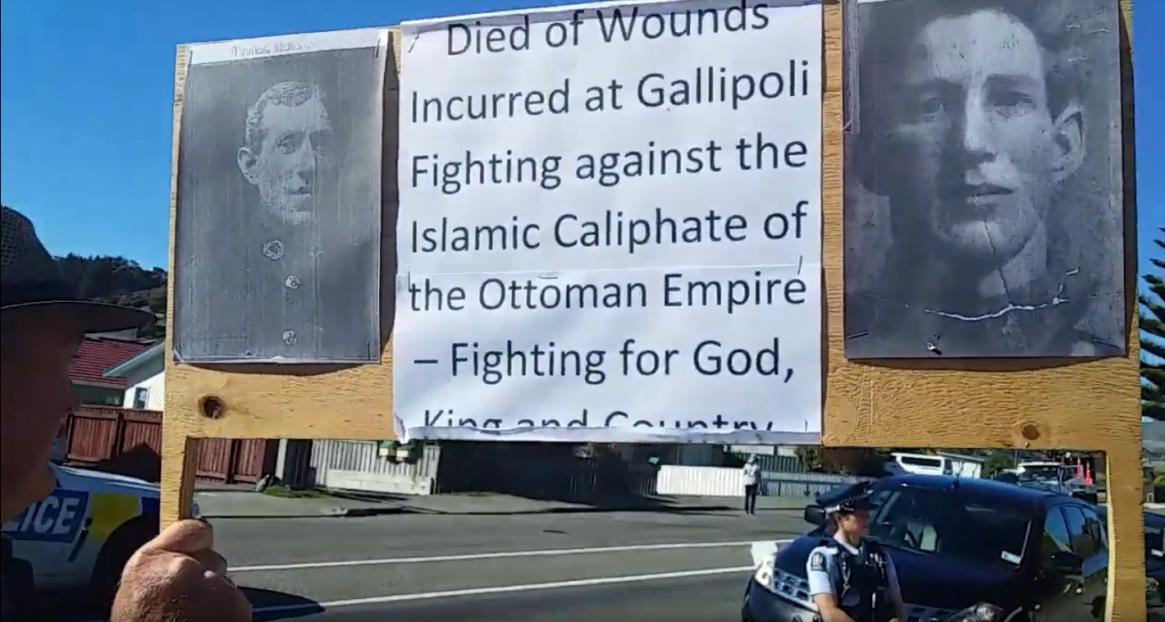 A reader has sent in two videos he took on Anzac Day of a man being threatened with arrest for his sign, with the police taking his details, and later trespassing him from an RSA. The front had a picture of the man's uncle and a tribute to his fighting against the Caliphate, and the other side had a Christian message:

Died of wounds incurred at Gallipoli  fighting against the Islamic Caliphate of the Ottoman Empire — fighting for God, King, and Country.

Allah has no Son and so cannot be the  God & Father of Jesus Christ — the God of Abraham, Isaac & Jacob — the God of the Holy Bible — your Creator & mine. Honour our Fallen Soldiers — Resist Tyranny — Fight for Freedom.

At one point a police officer says that "people are feeling intimidated and unsafe" after being prompted over and over again for a justification of their harassment.

The context given by Aaron is as follows:

He had a board honouring his family fighting the Ottomans in Turkey. The other side read that Allah had no son and Jesus was the only way. He didn't push it, he didn't preach. People had legitimate questions of their own will and it was peaceful until after the event when a woman asked about his sign. He wasn't holding it up for anyone to see. He obliged and answered her questions. She inflamed the situation by starting the argument that she was offended. Police then took the man to the middle of the road away from the crowd gathering.

I came towards the police and the constable taller than me tried to push his way towards me to stop recording. I told him that I had every right to record and had to protect the man's rights. He said it was of no concern to me and threatened me with arrest for obstruction. I said he was welcome to arrest me, but I'm protected by free speech and had to record to protect the man's free speech. I then moved around towards the man and other 2 officers, at which point I found out I wasn't recording. That's where the first video starts.

We then go into the RSA where another older man yelled abuse at the man and he just blew it off that he was just offended by the name of Jesus. We proceed to walk into the RSA where police have already gone into coerce someone to kick the man out for no reason. To which the 2nd video starts.

The RSA, being a private establishment, is of course perfectly entitled to kick out anyone they want.

That an entire squad of police officers were needed to keep any eye on a harmless man with a rather inoffensive sign on Anzac Day is a bit of a worry though.

Welcome to the cuddly police state: here to make sure you "feel safe".