Govt On Track For 13% Compliance With Gun Confiscation

The government is remaining tight-lipped on how well the gun confiscation programme is going. They release the total figure of firearms and parts purchased to date, including the number of licensed owners taking part— but don't give us much more to go on than that. A figure of 15,276 firearms means nothing without some context.

First we must figure out how many firearms are out there and how many of those are now prohibited. The best numbers available to us come extrapolated from sales data that Gun City released as part of their submission against the first Tarrant Law passed by parliament back in April. Gun City has the most accurate numbers of anyone out there, outside of NZ Customs, who are keeping very silent. 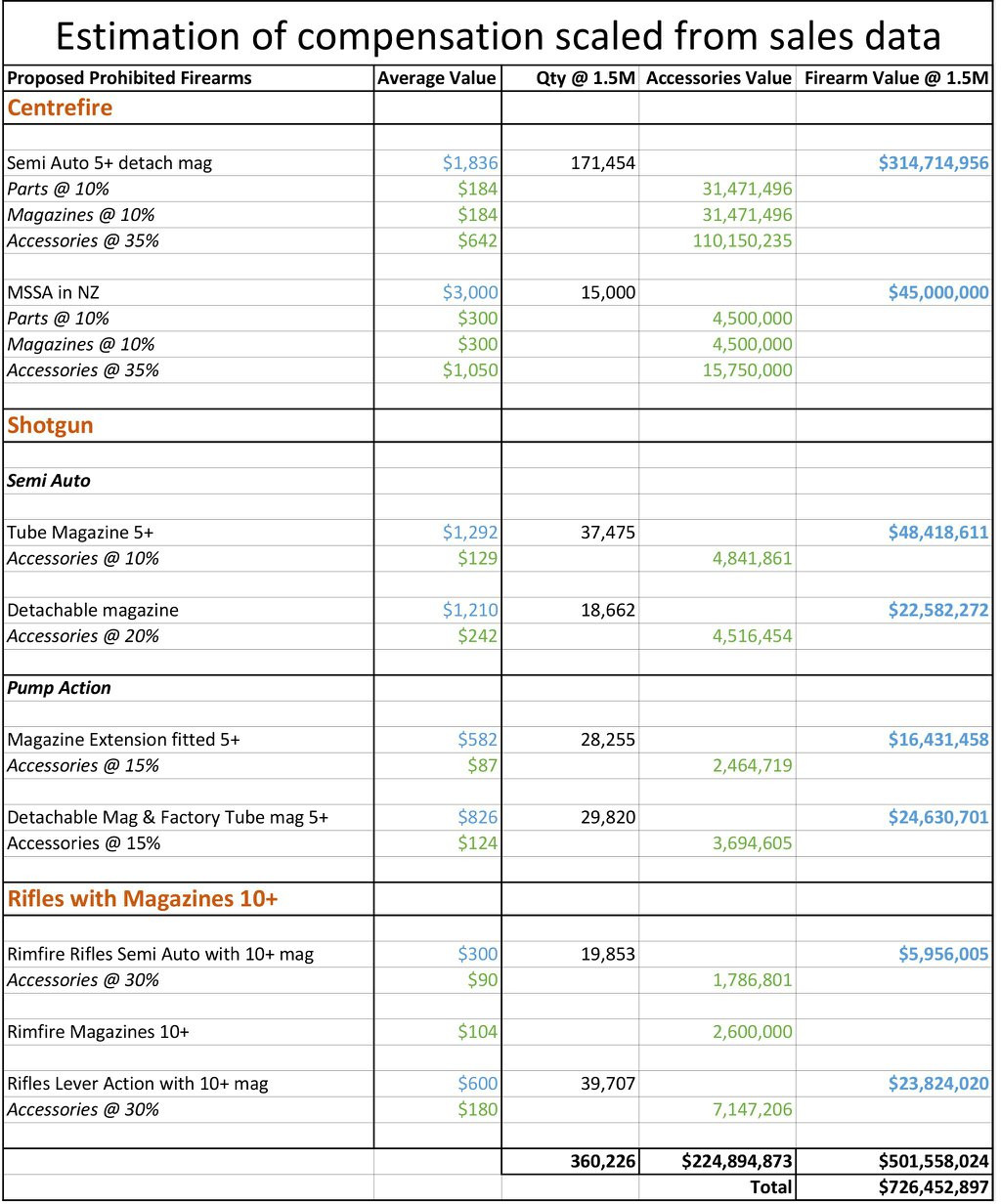 According to these figures, the legislation affects 360,000 of New Zealand's 1,500,000 firearms. 170,000 are centrefire semi-automatics, and there are a further 15,000 registered MSSAs (military-style semi-automatics). For the purposes of our calculations, we will assume all MSSAs are centrefires, but a good chuck are .22 rifles that were classified based on aesthetics—the main thing that makes an MSSA dangerous is the black pigment. Due to the low number of MSSAs this assumption shouldn't throw the calculations off.

The legislation affected far more than just centrefire semi-automatics. Half of firearms affected are mostly shotguns or rimfire rifles with tubular magazines. They can either be modified or sold to the government. We can't run this calculation without knowing the percentage of which make up the number sold to police, so to keep things simple we will provide a lower and upper range. The lower range will assume a 50-50 distribution between centrefire semi-automatics and shotgun/rimfire firearms. The upper range will assume all manual actions are going to be converted rather than handed in. We know this is not the case, so that makes our upper calculation an optimistic one: a maximum possible percentage of compliance.

When we add the centrefire semi-automatics and the MSSA numbers together we get 185,000 rifles that are the stated target of the "buy-back". These are the rifles that Jacinda wants "off the streets", but doesn't include any that are actually on the streets. We don't know how many the gangs smuggle in, and they're not handing anything over either. The government has been mute on this topic, as they aren't keen on cracking down on their homies.

According to alternative figures provided by the National Party, the police and government have been advised the number of banned firearms is as high as 240,000. That puts our calculations here on the conservative side, and I am feeling generous to our hapless government today.

"Buy-back" events started on July 13th and are scheduled to end by 30th September, so we can extrapolate from the current rate to predict what the police are on track for. As of right now, just over 15,000 have been handed in. It's been 7 weeks since they started collecting in earnest. There are 4 more weeks of police "buy-back" events scheduled, running to the end of September. The final compliance deadline is in December, but it's not known if the police will keep running events until then. Without the events, the number of hand-ins is likely to trickle to a halt until the final days.

Please note, these figures err on the side of optimism. If the true number of centrefire semi-automatic rifles in circulation is higher or if a over half of the hand-ins are pump/lever actions, then the compliance rate drops much lower.

We can probably expect a bit of a boost at the end for those who wait until the December deadline, but how much can we assume? It's been estimated that compliance in Australia was at around 19%, although sometimes a very optimistic figure as high as one-in-three is given.

If we take the unsourced National Party figures of 240,000 centrefire semi-automatics with an estimated 50,000 confiscated (they're projecting current hand-in rates to the end of December), you get a 10.4–20.8% compliance rate.

That does not include pessimistic scenarios where the majority of hand-ins are old lever/pump action firearms. Unless the police provide us a breakdown at the end, then we can only guess at the true rate.

Andrew Little's response to questions from the opposition in parliament was to say that all is going according to plan. What plan, you might ask?

Jacinda modelled her legislation after Australia's gun laws, and it would appear that NZ Police are aiming for a similar compliance rate with their "buy-back" as the Aussie Police experienced in the 90s.

With a lot of luck, they might just get there.