In Search Of The Rare Endangered White Supremacist

As somebody once said, "You should try everything once except incest and Morris dancing." (We are unsure of who said it, but when you reflect on how they knew to steer clear of the first of these, it’s probably for the best they retain their anonymity.)

So when a chance arises not three kilometres from your place of residence to catch a glimpse of a creature of near mythic reputation, previously thought to be long extinct, you take it.

I write of course of the sudden sighting of the fabled, extremely rare white supremacist within the bounds of our own Auckland University. An open letter from a group of students to the University management has alerted the world to their discovery of this strange and elusive species. Their tell-tale territorial markings—swastikas, and racist graffiti—are apparently all over campus. Not only that, but actual, real live NAZIS—the worst of the species—infest the place. According to this anonymous letter you cannot move for fear of goose stepping, Sieg Heiling, Aryan goons.

So off I set with camera and butterfly net with dreams of being on the front cover of National Geographic. Initially, the signs were good. On a street lamp across form Albert Park I found this: 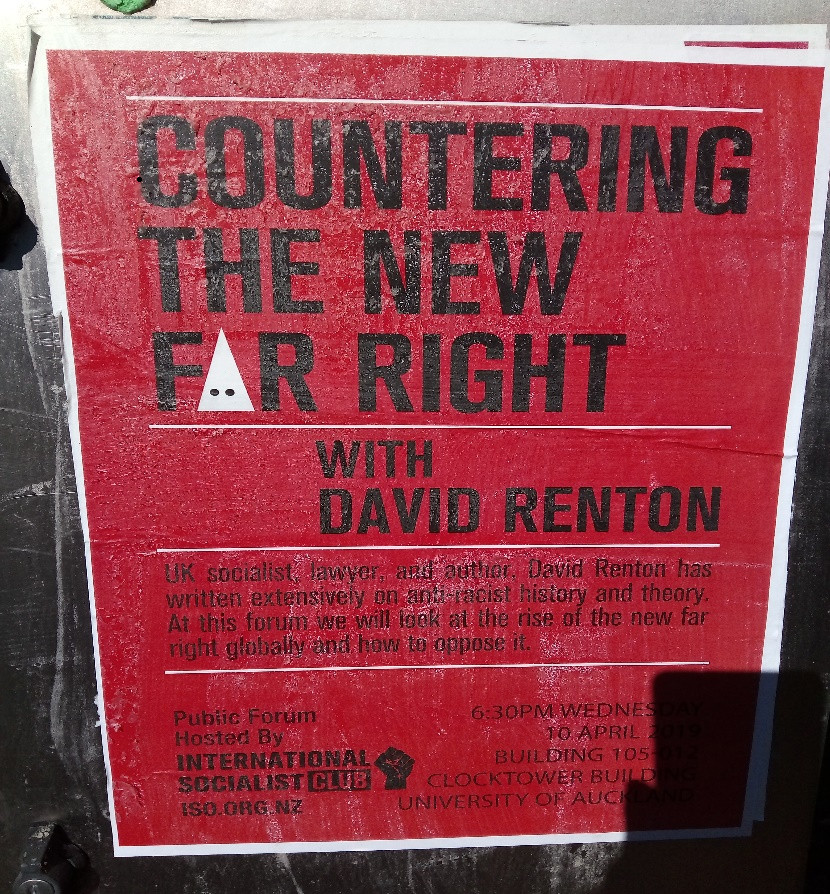 Surely a U.K. "socialist lawyer" wouldn’t be coming all this way to counter nothing?

Entering the University Quadrangle my hopes were high. I saw a lot of white people, but then I saw a lot of non-white people too. The white people didn’t look very superior. In fact most had that look of pallid listlessness that comes from veganism or severe malnutrition (sorry, I repeat myself). Many had dreadlocks and were playing hacky sack with all the energy of stoned cows.

The only people who looked in any way superior were Asian. They all carried text books, lots of them. Many wore glasses, which as Mao and the cultural revolutionaries knew often denotes intelligence—those are the buggers you put up against the wall first. Yet, I was not here for Asian Superianus — Caucasian Superianus was my goal.

The trial got hot again when I spied this handy infographic stuck on the side of a litter bin. 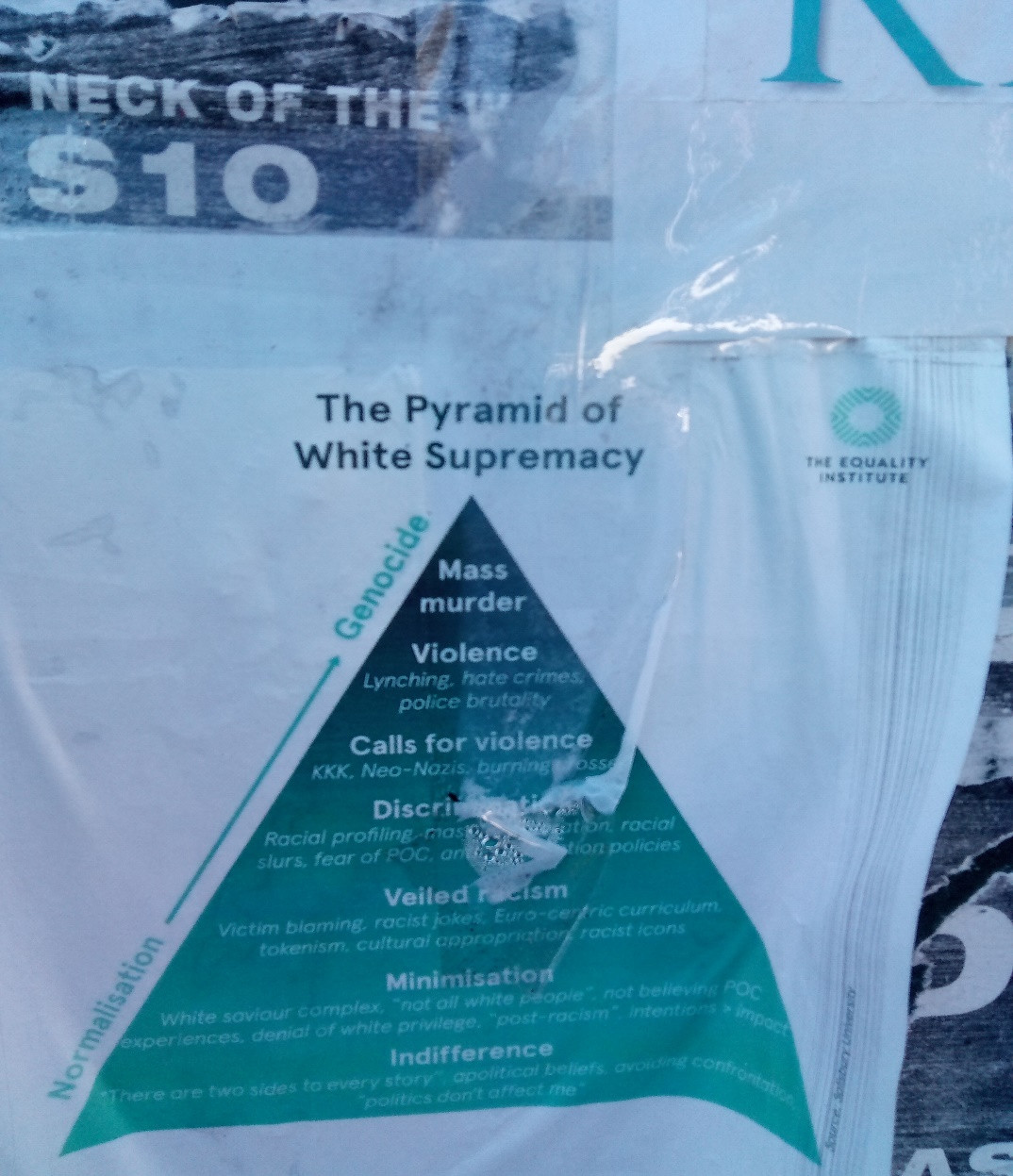 This was obviously a warning I was entering the white supremacists' habitat. I learned a lot from reading it. I had no idea that saying such innocuous phrases as "there are two sides to every story" and "not all white people are racist" was part of the white supremacist lexicon. My, my... they are sneaky characters. I was going to have to be on my guard.

I looked around for some swastikas or racist graffiti. There were none I could see although I did get a bit excited when I saw a crude drawing of a group of men in white robes surrounding a cross. Then I realised it was the University Christian Club advertising Easter services.

I strolled over to the University library. My spirits took a plunge when I saw these two posters: 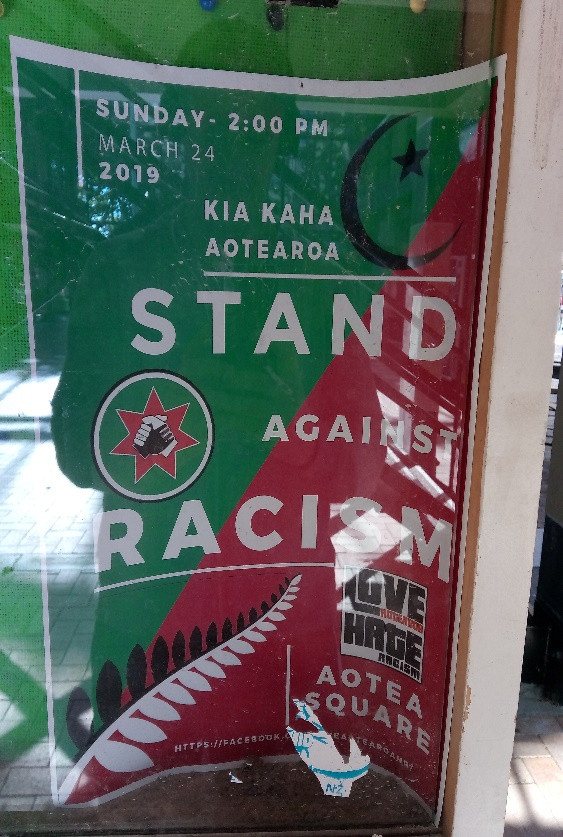 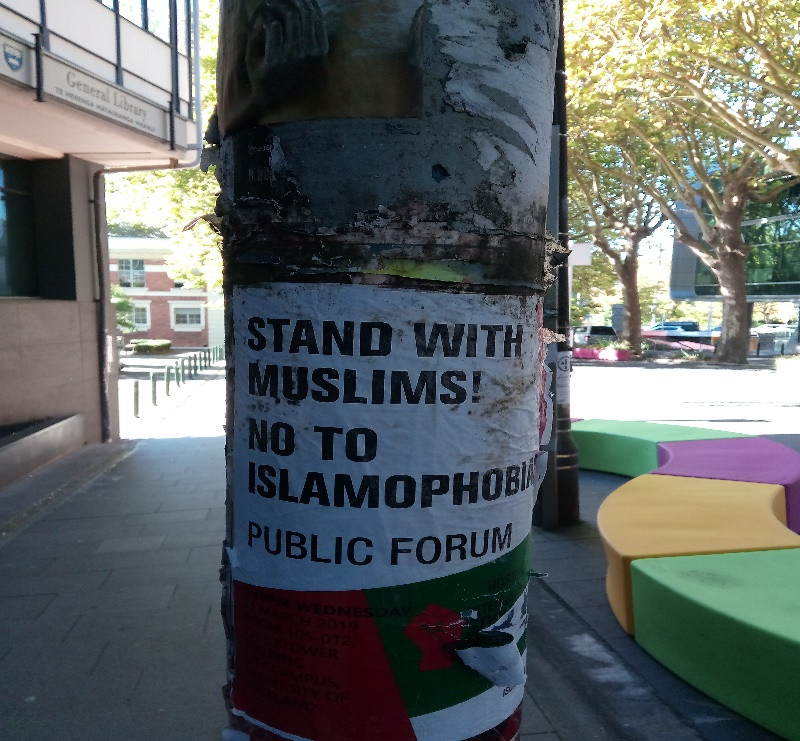 They were obviously of long vintage. How could any self-respecting white supremacist allow such messages of ant-prejudice to remain in their territory? I sat down and thought. Enough of the hide and seek. I had to draw them out. What would make a white supremacist come out of the shadows? An open display of mixed race romance, that’s what. Even better, an open display of homosexual mixed race romance. I spied a large Pasifika gentleman not five metres away. I sidled up to him and slipped my hand into his. I looked around, beaming in what I hoped was a look of gay rapture and waited for the intolerance to show itself.

The Pasifika gentleman thumped me.

Obviously this white supremacy had gone underground. I picked up the university calendar and perused the courses. As the open letter had insisted it was full of "content that centres European perspectives and histories". Shakespeare, King Henry VIII, Sir Isaac Newton—all white and all in there. Then I hit the motherlode, irrefutable proof that white supremacy has infiltrated the upper echelons of our higher learning institutions.

They teach German at the University of Auckland.

Still I left unsatisfied. I had no sightings of an actual white supremacist to report. I consoled myself with the thought of other searches for political extremists that had at first been unsuccessful. Old Joe McCarthy for example had taken a while to find his communists, but when he really got going it seemed like there was a ‘red under every bed’. The Spanish Inquisition too, had to work really hard to get their confessions out of those heretics. They had to come up with such nifty devices as thumb screws and the rack.

I wonder if the university management has thought of that.