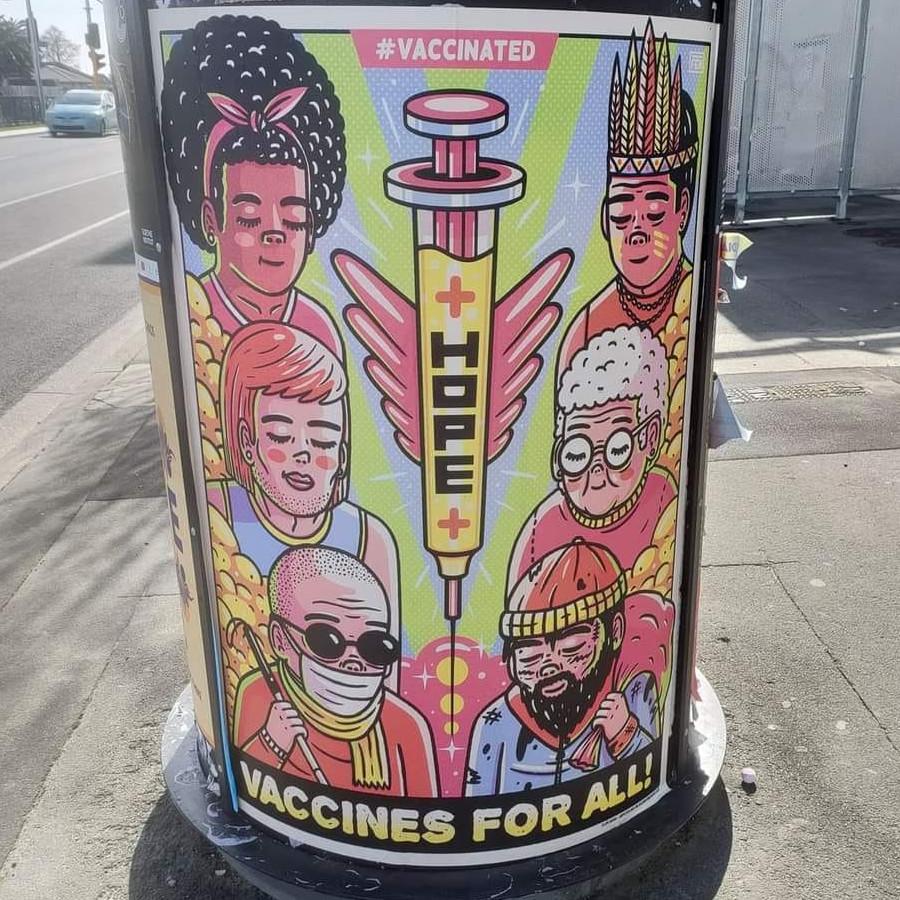 Is The Vaccine The Mark Of The Beast?

Is the vaccine the "mark of the beast"? [On request, this has been adapted from a lengthy Facebook post I made recently.]

If you understand the symbolism of the number 600, 60, and 6 as representing the "full fullness of man", or a totalising system, and the historical manifestations of the mark, such as exclusion from civil society for failing to celebrate pagan sacraments, then there is a "yes-ish" answer to this question.

First the rather obvious: people are being threatened with loss of income for not taking it. There is a level of social exclusion starting to be enacted that could see people blocked from the public marketplace. There is also a type of scientific sacramentality attributed to it from some quarters ("the vaccine saves"), including regime propaganda. People recognise the totalising system that attempts to account for everything through human action.

Those who are either jokingly or seriously talking about the vaccine as the "mark of the beast" therefore recognise an element of truth to it. This is not to say there is something wrong with vaccines themselves, but the implementation by our evil rulers manifests some of the patterns — especially the mandates. This isn't a complete fulfilment, as at an individual level there is no denial of Christ required, but at a national level there is. Rather than responding to God's judgement with repentance, the "full fullness" or totality of man's ingenuity is deployed to overcome the divine warning that is the pandemic.

This is where the "plandemic" narrative has a bit of symbolic grounding too. All is planned in God's Providence. Pestilence and plague are tools God wields time and time again in the scriptures. People want to see the "plan" because they know there is one, but many look down instead of up.

Modern exclusion from the marketplace doesn't mean one can't buy or sell, right? The issue with the online world is that it is transactional while physical commerce is relational. "BUt yUo cAn sHoP oNLinE" doesn't really explain what people are threatened with losing. Both body and soul don't function on mere transactions. We need relational encounters. Handling the food, trying the clothes, testing the quality of wares, smiling, and talking. These are relational actions that are part of traditional commerce. Reducing dissidents to an online avatar is dehumanizing.

In addition, the actions taken by the regime in the supposed preservation of life has been to a large cost in Christian service, from forbidding sick/deathbed ministry, funerals, weddings, and corporate worship (bUt YoU cAn dO iT oNliNe). The baptism by vaccine can restore what the regime has taken from you, claiming ownership over you, your familial interactions, social experiences, and God's worship.

Many probably struggle to vocalise this. They see the patterns, through a glass, darkly. Their hesitance, apprehension, and resistance comes from a natural and proper place. Many become susceptible to being swept up in conspiracy and other absurd theories — they are not alone in this, most science worshippers do this at the other end of the spectrum, including the regime's own experts.

All of the vaccines, or their approval processes, are compromised with research, development, or testing on aborted fetal cells. Pfizer is the most ethical option, only being tested on immortalised fetal cell lines in the same way that many over-the-counter medicines are, but we must still object strongly to this practise and see it ended. All these pharmaceutical corporations engage in a type of techno-Molochism and people have every right to object.

Christians also see little from their "faith leaders" on this. I have seen countless pastors shill for "Big Govt" and "Big Pharma", perhaps the layman is rightly suspicious of "Big Eva" too. Where have these leaders been on the importance of national repentance and corporate (public, in-person) worship? Their fear of ridicule by the world only makes one more suspicious. Almost all of it is a theology where everything is rendered to Caesar.

The lockdowns continue to be inherently immoral. The Christian life is one of spiritual primacy. Eternal salvation is more important than an extended earthly life. Therein lies a big problem: people continue to die at a regular rate even if anti-corona policies are successful. Those granted temporal salvation from earth by a virus will still die. Now nearly two years in, it's likely that most of those "saved" in the early months have now died of other causes. Did we save them or did we damn them? Christians have every reason to be sceptical of those who promise temporal salvation and of a system that promises earthly safety as its highest virtue.

Nor does your government truly care about saving lives. Plenty of people die in preventable ways every year. They don't make the roads impervious to accidents. They don't mandate calorie allotments, exercise quotas, enforce weight limits, or cap sugar intake. They outright murder +13,000 preborn babies every year in techno-Moloch sacrifices. They're building systems for legal mercy killings due to start by the year's end. They continue to delay life-extending medical treatment and surgery for tens of thousands through lockdowns. People are rightly suspicious that the government might just maybe inject them with deadly poison, and when all the experts, doctors, scientists, and journalists are on the payroll… well, people start to think strange things.

The evils that brought this plague on us can be forgotten, vanquished by a miracle of man's technological prowess. It's safe and effective. It can make things normal again, but only if applied to the whole herd. All must be accounted for, nothing left to Providence, and those who will not be counted among the number of the vaccinated must be excluded.

It can all end if you just give in and take the vaccine… but will it?