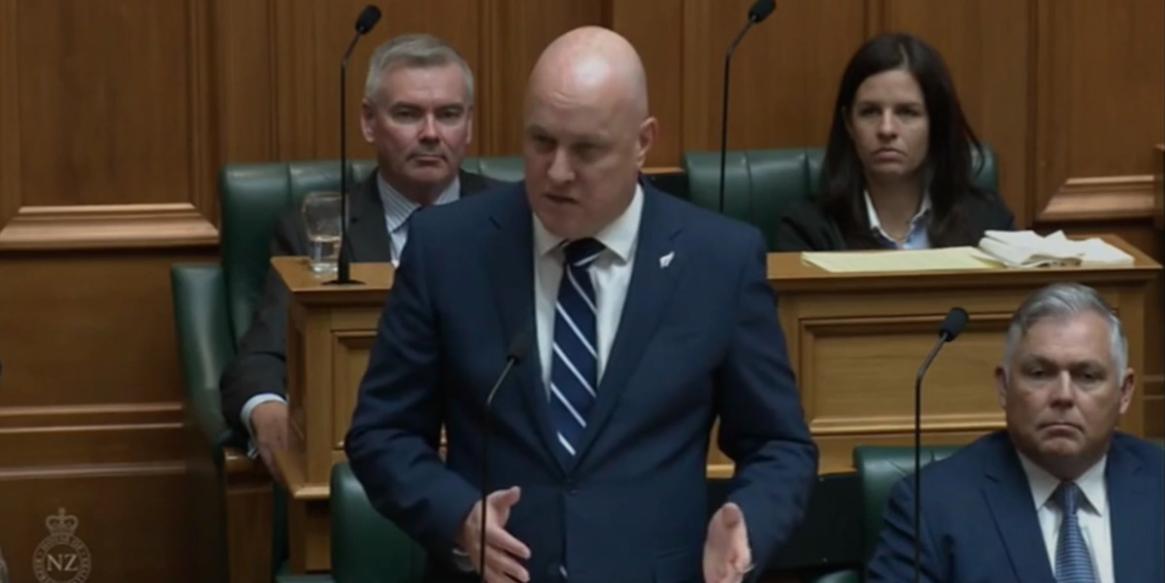 I'm rarely so irked by a speech that I feel compelled to respond, but Christopher Luxon's maiden speech fits the bill.

Through [sic] history, we have seen Christians making a huge difference by entering public life. Christian abolitionists fought against slavery; [...] The world is a better place for Christians like William Wilberforce [...] contributing to public life. My faith is personal to me. It is not in itself a political agenda. I believe no religion should dictate to the State, and no politician should use the political platform they have to force their beliefs on others.

The second half is rather insulting to William Wilberforce, who argued for precisely the opposite of what Christopher Luxon advocates:

I would suggest that faith is everyone's business. The advance or decline of faith is so intimately connected to the welfare of a society that it should be of particular interest to a politician.

Politics is the very act of forcing your beliefs on others. How utterly preposterous to claim otherwise. Does anyone think that non-Christian MPs legislate from a neutral worldview? Laughable.

Wilberforce abolished slavery precisely because he believed that his religion should dictate to the State.

"A private faith that does not act in the face of oppression is no faith at all."

Luxon's rejection of the Christian politics that Wilberforce espoused was preceded by Luxon's statement of how his faith has shaped his life and how he views Jesus.

"I see Jesus showing compassion, tolerance, and care for others."

Who did Jesus have compassion on? Let's have a look at one typical example: "And Jesus, when he came out, saw much people, and was moved with compassion toward them, because they were as sheep not having a shepherd: and he began to teach them many things." (Mark 6:34) These people sought him out, and they came to seek healing, forgiveness, and teaching. He was compassionate to those who believed, "for the Son of man is come to seek and to save that which was lost." (Luke 19:10).

Tolerance? Jesus says "I am the way, the truth, and the life: no man cometh unto the Father, but by me" (John 14:6). An intolerant declaration. Jesus tells an adulteress "go and sin no more" (John 8:11). He chases merchants from the Temple (John 2:15). He condemns the Pharisees as "whited sepulchres" and a "generation of vipers" (Matthew 23:25-36). Jesus is intolerant of sin, but offers forgiveness to those who believe.

The description of Jesus showing care for others similarly needs further qualification. As demonstrated, Jesus shows his care in a way that demands repentance. He promises his followers they will be hated, afflicted, and killed (Matthew 24:9). Of his closest disciples, all but one died as martyrs.

The compassion and care of Christ is alien to those who reject him, and those who take Luxon's entirely simplistic secular view at face value will be shocked to find Jesus say, "think not that I am come to send peace on earth: I came not to send peace, but a sword." (Matthew 10:34)

"He doesn’t judge, discriminate, or reject people; he loves unconditionally."

Jesus does not judge? I believe the word for that is heresy—denying an aspect of Christ's divinity or humanity.

Jesus does judge. Jesus is Judge. The Apostle Peter said, "And he commanded us to preach unto the people, and to testify that it is he which was ordained of God to be the Judge of quick and dead." Act 10:42. (cf 2 Timothy 4:1 and 1 Peter 4:5).

In Revelation we see a prophetic depiction of Christ : "behold a white horse; and he that sat upon him was called Faithful and True, and in righteousness he doth judge and make war. His eyes were as a flame of fire, and on his head were many crowns; and he had a name written, that no man knew, but he himself. And he was clothed with a vesture dipped in blood: and his name is called The Word of God." (See Revelation 19:11-16.)

Jesus does reject unregenerate sinners. He says, "All that the Father giveth me shall come to me; and him that cometh to me I will in no wise cast out" (John 6:37). In his capacity as judge he will one day repeat these words: "I tell you, I know you not whence ye are; depart from me, all ye workers of iniquity." (Luke 13:27) Jesus will reject those who reject him.

Nor is it entirely true to say that Jesus' love is unconditional. It is undeserved and unearned, as "while we were yet sinners, Christ died for us" (Romans 5:8.) Yet he demands faith, repentance, and obedience from us. John the Baptist said of the coming Messiah: "The time is fulfilled, and the kingdom of God is at hand: repent ye, and believe the gospel." (Mark 1:15)

What prompted Christopher Luxon to utter a woke mantra and pretend that Christianity has been like that all along?

"It seems it has become acceptable to stereotype those who have a Christian faith in public life as being extreme;"

None of what I have outlined above is particularly extreme as it's been Christian orthodoxy for two thousand years. What is extreme is Luxon's unorthodox statement on Jesus, especially since he's supposed to know better, being decried as some kind of "Christian fundamentalist" by his anti-theist detractors up to this point. Perhaps they were mistaken, or perhaps I'm missing something obvious, but I can find no hidden or omitted qualifiers that might even remotely transform his statement into something resembling orthodoxy.

No hint of Christ will be tolerated by Luxon's detractors. He wishes to please those who hate Christ, and that will destroy him. As Christians, we should not tolerate those who want to sell Christ to buy the world.

Later in the speech he talks about how hard he worked to get the "Rainbow Tick" in his time as a corporate CEO. In response to that, Jesus says "from the beginning of the creation God made them male and female" (Mark 10:6) and the Apostle Paul describes such activity as "vile affections" (Romans 1:24-27). The entire LGBTQWERTY agenda is the subversion and desecration of the "image of God" (Genesis 1:27) and Luxon is proud of participating in one of the biggest anti-Christian hate crimes of our time.

The silver lining in all this for Christopher Luxon is that when he becomes leader of the National Party, he won't have to do a sodomy apology tour like Bill English, Simon Bridges, and Todd Muller all did.

The "Woke Jesus" that Luxon presented to the nation via his maiden speech does not exist.