New Zealand's Strange Reaction to a Short Month of Anarchy

For nearly a month after the election, this country did not have a government. There were continuous stories about how Winston Peters was keeping everyone waiting and that he should just hurry up. There were any number of coalition options possible, but since a "Grand Coalition" and a "Blue Green" alliance were already ruled out before the election, Winston did hold the balance of power, but only because they let him. Winston also didn't help the situation by setting deadlines, but the question remains, why did the media push for a quick announcement date?

As a theoretical anarchist myself, I had a great few weeks. I was hoping the negotiations would drag on and on. Once a decision had been reached, about half the country would be disappointed. With no government, everyone could be happy for a change. Except they weren't. The media talked nonstop about how it was taking forever and even Facebook comments calling for NZ First to hurry up reached thousands of likes. Clearly having no government made many Kiwis a little anxious.

Could it be the media was worried the illusion that members of parliament run the country would be shattered if the country carried on for months and months without a formal government?

Those who have seen the p̶o̶l̶i̶t̶i̶c̶a̶l̶ ̶s̶a̶t̶i̶r̶e̶ ̶s̶i̶t̶c̶o̶m̶ documentary Yes Minister, would know that bureaucrats actually run the country. They do so without much guidance from their respective cabinet ministers, in fact, the ministers generally do as they are told by the bureaucrats who have much more experience. Of course, budget increases or a very headstrong minister can make changes happen. More money into the department means new pet projects get worked on, but that's terrible if, like me, you're one of the country's few taxpayers. And let's face it, strong-willed politicians are few and far between.

Not convinced? Let's have a look at a chart that I saw circulated during the negotiations: 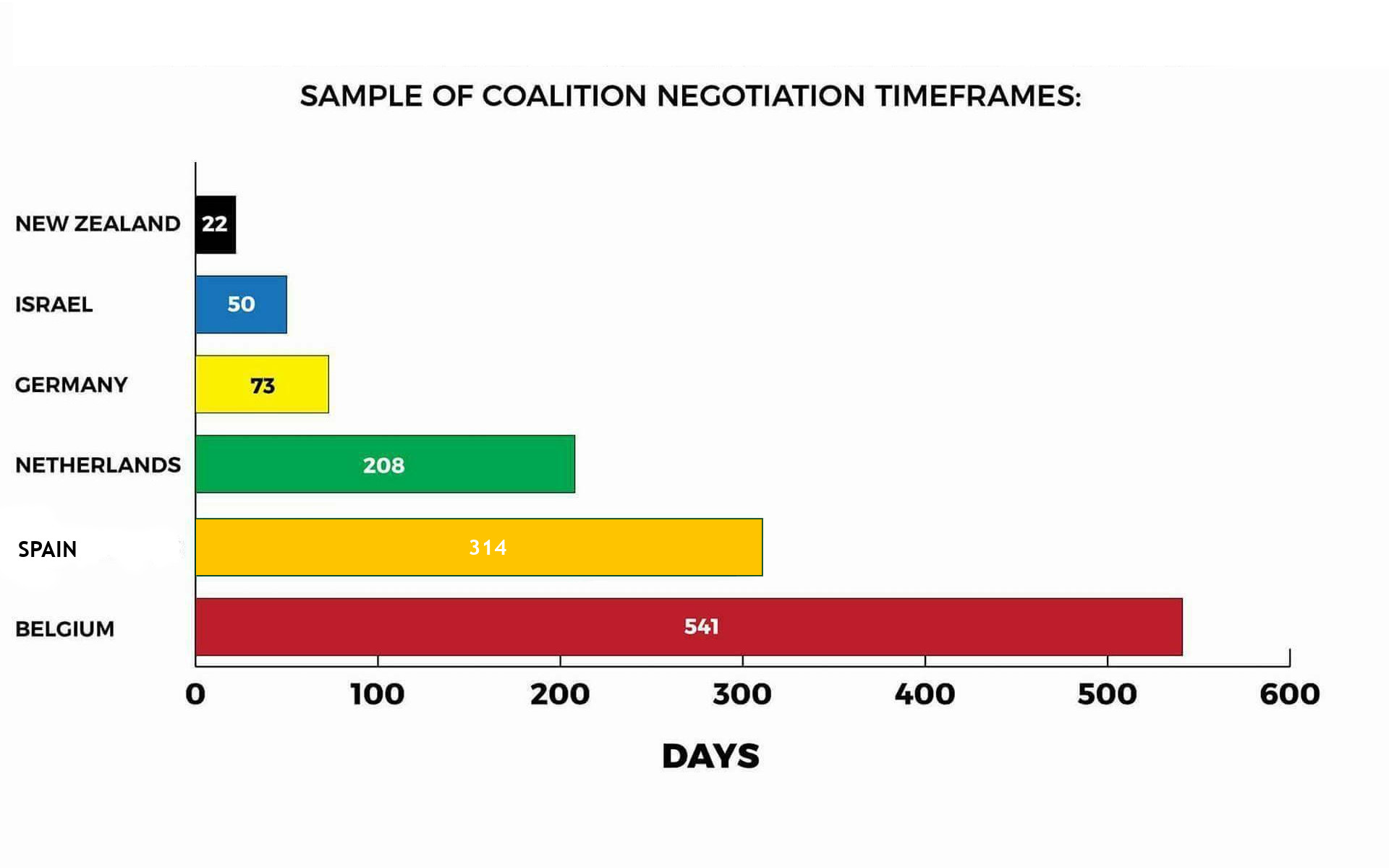 Those countries continued to do fine. Spain even had a second election, and almost a third. I bet that most people didn't even notice there was no official government during the lengthy negotiation periods that many of these nations endured. The Americans had the same problem during one of their "government shutdowns" a few years ago, except the politicians seemed to stick around to argue and most of the unnecessary bureaucrats went home. The professional class was in hysterics and did their best to make sure it ended quickly, after all, if the people didn't notice anything change when nobody was running things, they might question what all those politicians and bureaucrats are for in the first place.