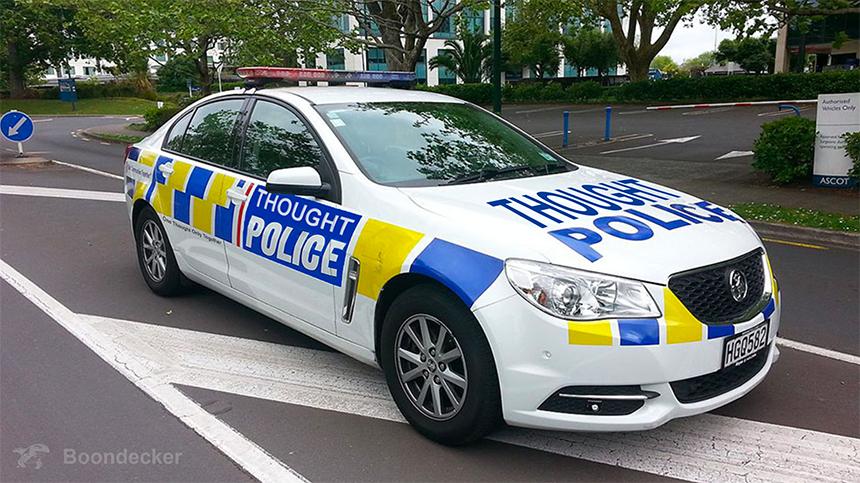 One of my friends and moderator on Right Minds, Matthew McCluskey, received a visit from the friendly local neighbourhood cops on Saturday night at 9pm. He's allowed me to use his real name to provide some weight behind this bizarre story, as he usually performs his limited online activity under a pseudonym.

He was cleaning his Smith & Wesson M&P15-22 when the doorbell rang. There was a police detective at the door, with an armed escort waiting in the wings. He claimed to be doing a "follow-up check" on vetting, as Matthew had recently had his firearms licence approved. Which is rather strange, as protocols require proper vetting prior to a licence being issued. Matthew had just recently been through this process, including having his employer give a reference as part of the licence application.

They asked to look at his firearms storage, which has been recently inspected, and proceeded to take photos of, and document details on, all his and his step-father's guns. The rest of his family arrived home and the police took him to his bedroom, closed the door, and told him to sit down.

Tomorrow is the anniversary of the March 15th terrorist attack, would you describe it as such?

Are you active on social media and what's your username?

Are you a member of any political groups?

Does the "right" in Right Minds stand for right-wing? [We had to pause our conversation at this point owing to my needing a full minute to laugh.]

Do you donate to any political parties or other organisations?

Do you know what New Conservative's immigration policy is?

Do you know any representatives of the New Conservative party?

What are your views on immigration?

Do you have a storage container (what's in it and where is it)?

He protested against being asked questions in private, but they ignored him until his step-dad opened the door and told them to come into the living room. They asked him a few questions about religion after noticing his Bible and rosaries.

He was told the M&P15-22 was "very scary" and the detective checked it over several times to make sure it wasn't centrefire.

After 45 minutes, they left.

All this to harass a young man with virtually no online presence, mere months after they vetted him (which included interviewing both his step-father and his employer) just because it was the day before March 15th. Or perhaps because it was several days after the founder of Right Minds filed a lawsuit against police in court. Or maybe it was just a slow crime day and they wanted to pop in at a random house for a friendly visit.

Do you feel safe yet, comrade?