After I'd been having a little trouble uploading political videos to the Right Minds NZ Group on Facebook, it was suggested that I do one about rainbows and unicorns instead. I think I've mostly resolved the issue, although I am still not sure of the cause, as the errors from Facebook were as vague as can be.

I wanted to do something interesting, but still informative, so I veered from the realm of politics to the realm of history and religion. You can watch the video embedded below (FB, YT), or scroll past it for a transcript of sorts. Enjoy.

The first thing most people think of when you mention rainbows is… the Bible, of course.

In Genesis chapter 9, God had previously destroyed the world with a flood because of the violence and wickedness of man. He now tells Noah and his descendants that they may eat all plants and animals, he institutes capital punishment for murder, and again commands them to be fruitful and multiply. He then signifies the the rainbow will remind man of his destruction and God's promise to never again destroy the world with water again. So the next time you see some prideful people waving multi-coloured flags, remember the true story of the rainbow. 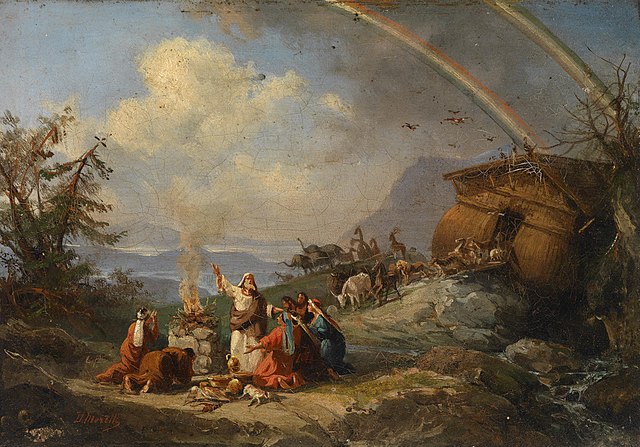 Now, rainbows and unicorns are closely linked, because Noah had some baby unicorns with him on the ark. The Bible talks a lot about unicorns, they're mentioned no less than 9 times.

They're used to describe the strength of God, so this must be a very powerful creature indeed. Job, who is colourful is his depiction of majestic beasts like the leviathan and behemoth, describes unicorns as beasts who will not serve man: they cannot be tamed.

There's a problem though. If you have a modern translation, you won't find any unicorns. It's all "wild ox", which is supposed to be some kind of extinct Eurasian Bison that now only survives as our modern domestic cattle. Not exactly untamable.

So what did the Westminster Divines and their precursors have in mind of this fearsome unicorn? The Hebrew word "reem" does not provide many clues. We can find some hints in the Septuagint, a Greek translation undertaken by seventy Jewish scholars in the 3rd century before Christ, and the Vulgate, a Latin translation undertaken by Gerome in the late 4th century of our Lord. The Septuagint has monoceros and then the Latin has rinoceros.

But wait, you say, doesn't a rhinoceros have two horns? Some of them do, but others have just the one, like the Indian rhinoceros, or scientifically, the Rhinoceros Unicornis. Most species of monoceros are extinct, but many of them were very large, as you can see in the image attached the this article. If you were going to describe the strength of God to man, a giant 5 tonne unstoppable and untameable herbivore might do it.

In 1763, John Gill published his Exposition on the Whole Bible, and he usually takes unicorn to be a reference to either the monoceros or the rhinoceros.

According to Pliny, the monoceros, or unicorn, is the fiercest of wild beasts; in its body like a horse, it has the head of an hart and feet of an elephant, the tail of a bear, makes a great bellowing; has one black horn rising up in the middle of the forehead, of two cubits long; it is denied that it was ever taken alive ...

The Biblical and Theological Dictionary by Richard Watson in 1832, gives a thorough defense of unicorns as rhinoceri.

The original reem, by all the older translators rendered rhinoceros, or unicorn, is by some modern writers supposed to be the bubalus, bison, or wild ox. There can be no doubt that rhinoceros is the proper term; for this animal is universally known in Arabia, by the name of reem, to the present day.

Here is one more practical example where rhinoceros is the only animal to be understood, Deuteronomy 33:17.

Armed with your new understanding of unicorns, you can now see it: the "horns of the unicorn" are a big one and a little one. The big one for Ephraim's ten thousands, and the small one for Manasseh's thousands.

For over 2,000 years, the Hebrew word Reem has been synonymous with unicorns and rhinoceri. The anti-unicorn lobby, assisted by modern translators, have spent the last 200 years throwing this understanding into darkness.

So there you go, unicorns are real.