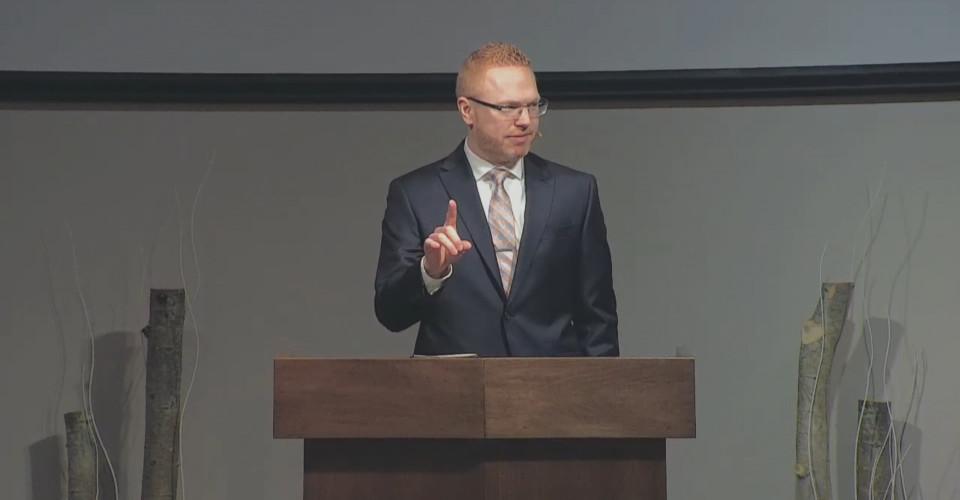 With the eleven-out-of-ten media hysteria around Brian Tamaki leaving Auckland during Auckland's most recent lockdown—legally, and alongside at least 9,000 other people—before lockdown began, it’s not surprising that our professional tellers of half-truths haven’t found time to cover a far superior pastor in Canada.

In Canada, many parts of the country have been under some form of lockdown for an entire year. Predictably, the economic and social costs have been devastating, as businesses are destroyed and the churches and charities that would normally deal with the downstream fallout are completely incapacitated by the government. The frustration is probably higher nowhere than in Alberta, Canada’s most conservative province, where a largely Christian and very unwoke population have gotten increasingly annoyed as their livelihoods are destroyed, and the only approved outlets for dealing with the pain are bars, gyms, and multinational big box shops. Churches need not apply to open; the constitutional right (‘charter right’, in Canadian parlance) to freedom of worship has been 'balanced' out of existence, with no legal or significant political pushback.

Much like all the deadly forest fires caused by Green parties in the USA, Australia and New Zealand, it seems like the government is causing a huge build-up of tinder and lightweight fuel, and all it will take is a match for flames to burst out.

James Coates, pastor of Edmonton GraceLife Church, may be that flame.

In late 2020, after COVID restrictions had dragged on for months with no end in sight (except for the aforementioned purveyors of liquor and imported Chinese products), the church began defying local bureaucrats who ordered that they neglect meeting together, and held normal Sunday services. On Sunday February 7th, 2021, the bureaucrats’ anger waxed mightily, yea, so they did smite the pastor with a Health Order, knowing that their holy writs had so far cowed men and women of God quite easily.

To their consternation, Coates quietly ignored them and GraceLife held a service that day. A week later, all eyes in Edmonton were on them. Having proven themselves masters of letting their actions speak louder than their words, they now proved that it was not for lack of choice. The church website posted a well-reasoned and courteous statement that they would be complying with the New Testament rather than the Health Order the same day, and on the 14th, Coates gave a lengthy sermon justifying his position.

Showing a little more PR nous than many churches, the statement, which you cannot avoid when you visit their website, was aimed at the public and is an openly almost entirely secular rationale, although it links to theological justifications in a series of YouTube videos for those who are interested.

The church appears to be a perfectly normal Reformed / Calvinist church and the characteristic logical reasoning style associated with such churches suited the statement. It strings together several crucial, and officially acknowledged—no conspiracy theories, right or wrong—pieces of science which have been badly neglected in local COVID public policy debate.

The median age of COVID deaths in Alberta is 82. What is notable is that the median life expectancy in Alberta is also 82! As any statistician can tell you, combining or splitting populations with identical medians results in the same median. COVID is, literally, and irrefutably, not making people die in Alberta any sooner than they otherwise would, to the extent that can be measured by anyone.

Furthermore, by the functional WHO (and Alberta) definition of a pandemic that was in place when the current relevant legislation was written, COVID, at least as it is in Alberta, would not qualify! Not even close. Prior to the H1N1 outbreak a decade ago, a necessary property of a pandemic was that it caused mass death and significant excess mortality. In Alberta, this simply isn’t the case; excess mortality is not exceptionally high.2

The statement noted that lockdowns aren’t suitable as a primary means of control once a virus is endemic and that their side effects are devastating. GraceLife was able to go beyond the usual hard-to-measure (and thus to bureaucrats, non-existent) economic damage. They were able to point to a lady in their congregation who had died due to not receiving hospital treatment due to over-judicious COVID-related restrictions in the local hospital. Hospital wouldn’t let granny in, so she died.

It then noted that exercising civil liberties in a protest situation where those liberties are seriously threatened is an act of love; it does no one any good to lie down and let the government strip rights away indefinitely.

Finally, it invites people to repent of their sins and acknowledge Jesus as their saviour, which is an excellent use of getting 1,000x their normal internet traffic, and showed that they had not forgotten their core reason for being.

The sermon was a different kettle of fish. Whereas the statement was deliberately secular, the sermon was an hour long exposition of none other than Romans 13! For those who don’t know the Bible, Romans 13 is the key bit in the Bible that outlines the duties of churches to obey the law. It says (verbatim) that all Christians are to be subject to governing authorities. It’s exactly the part of the Bible that any unconscientious “Stuff that, the Bible means I’m the good guy no matter what” preacher would simply gloss over or ignore.

Not so James Coates. In a move unknown to (and thus inexplicable by) the mainstream media, Coates focused on the scripture that Christian critics would go straight to. He affirmed Romans 13 in its entirety despite it being in apparent conflict with him, and scrupulously looked at its limitations.

Firstly, he affirmed that Christians must indeed submit to state authority and simply notes that episodes in the books of Daniel and Acts render a reading of “submit” as synonymous with “obey” in every instance impossible. In Daniel, Daniel and co refuse to worship Babylonian and Persian kings when ordered to. They don’t attempt to overthrow him or challenge his authority to punish them; they simply refuse to commit idolatry. Similarly, in Acts, Peter and the apostles don’t challenge the Sanhedrin (Jewish High Council) when it orders them to stop preaching in public, despite the fact that the Sanhedrin has just put Jesus to death. They do, however, refuse the Sanhedrin’s order to stop preaching. They even tell the Sanhedrin that it is free to judge them, but that they are conscience bound to keep doing what they are doing despite what punishment may come. The book of Hebrews commands Christians not to neglect meeting together, and after many months, they must obey the Bible rather than the state.

What is fascinating, and speaks volumes about Coates’ sincerity, is that he went on to explain that, as submitting to and obeying authorities are different, one must keep submitting even when not obeying. GraceLife members must not slag off politicians. They must not call the authorities tyrants or anything else that undermines their legitimacy or justify their overthrow. Furthermore, it follows that GraceLife members are even obligated to accept punishment from authorities with full grace. Just because an authority is mistaken, or even unrighteous, doesn’t let you lash out. The judge that arraigned Coates for trial noted his excellent manner and sincerity.

Secondly, he argues that there simply are some areas where the state never did have authority over a church; and the governance of church preaching and meeting is one of them. In other words (mine, not his), separation of church and state works both ways.

My personal opinion upon first listening to the sermon was that the second argument is much stronger than the first. But as I’ve considered it more, the first argument seems better and better, not least because of how it is being put into practice.

The bureaucrats put out an arrest warrant for Coates on the 15th, one day after his Romans 13 sermon, and he handed himself in on the 16th. He was tempted with bail on the basis that he refrain from preaching, but in an act of honesty, told the judge that if he was not in jail, preaching is what he would be doing. The local media were less forthright, noting only that he had rejected bail conditions, with few or none of them reporting what the conditions were. Coates remained in prison.

Supporters of GraceLife then organised a protest outside City Hall. They declared upfront that they would not allow any signs at their protest that denigrated the authorities, in keeping with their “Submit, don’t obey” message, and that all protesters were to disperse peacefully as soon as the protest end time came. Needless to say, it was not exactly like BLM in Kenosha.

Subsequently, Coates was committed for a trial in early May. The provincial governor, Jason Kenney, who hitherto has postured as a rock-ribbed conservative, is now being equated to Justin Trudeau within his own party. The liberal media have continued to attempt to portray Coates as an “I do what I like, burn in hell” pastor, but with only mixed success; it’s rare to see so many comments in newspapers that begin, “I’m not a Christian, but… [expression of support]”

Happily, GraceLife church have continued to hold services; this Sunday, so many people attended that GraceLife had to turn people away because they were in breach of the fire code, something that no one, including GraceLife disputes the legitimacy of! Hopefully other churches will join in soon. The authorities have balked at arresting hundreds of people. Donations have presumably poured in through their exceptionally easy to use donation page and can be ring-fenced for legal funds, or different church ministries.

It is hard to think of any better, more conscientious, more needed civil disobedience in a developed Commonwealth country in our lifetime. This is a story to follow and a cause to support. Christians, and those who bear them good will: Submit. Don’t obey.

Editor's note: the first draft of this essay was sent to me two week prior to publishing, and pastor James Coates was finally released today after spending 35 days in jail and was fined $1,500.

1 NZ History nerds, make another note for the same name.
2 The laughable defence that is somehow offered in peer reviewed journals is that the definition was vague enough that maybe it didn’t, strictly speaking, match the definition of a definition but a description-definition. No one knows how that matters, but it’s a nice way to squeeze out a talking point to say “the word ‘pandemic’ was never actually defined”, which can be echoed like a mantra by liberal media outlets and ‘fact checkers’.