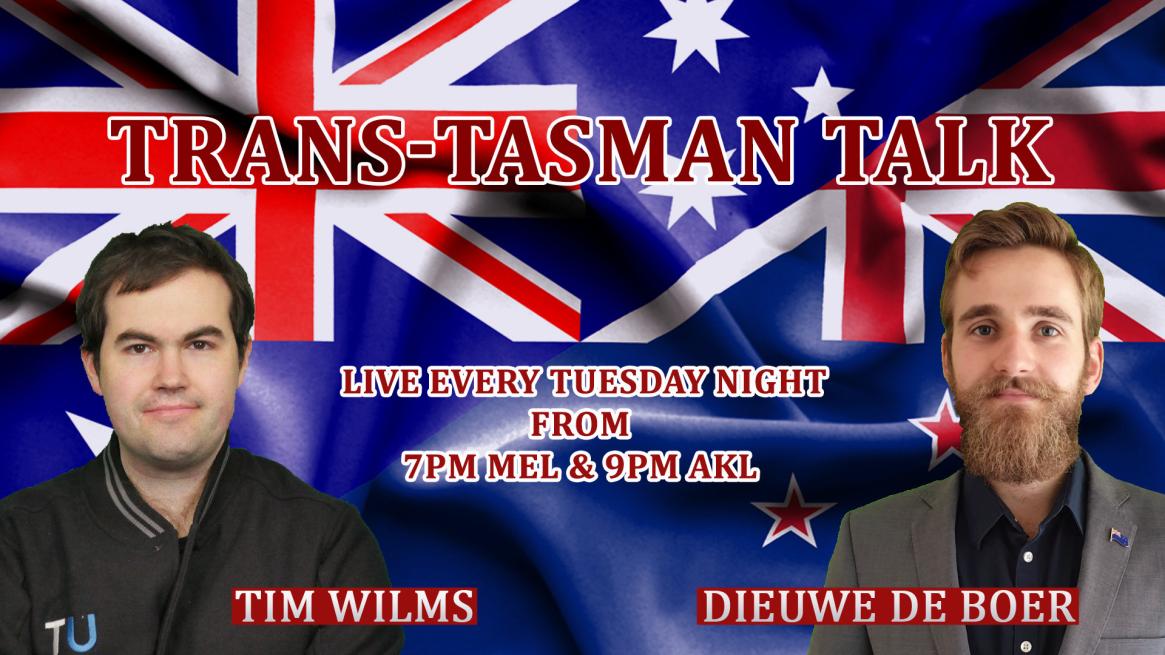 The show opened with some announcements: we're planning to shift to a new timeslot and tweak the name of the show. It's likely that we'll be trialling Friday 6pm (Melbourne) and 8pm (New Zealand) as the new broadcast time starting in the first week of March. Many in our right-wing audience are also triggered by the word "trans" in the show title, so we are considering a slight re-name to "Trad Tasman Talk"—the most traditionalist talk show either side of the Tasman.

There will be a "Conservatism VS Libertarianism" debate this Saturday between Dieuwe de Boer and Stephen Berry at 2pm, broadcast on James Davidson's DLive channel.

The show opened with talk about the kid's show "Paw Patrol'' which has been criticised for being too capitalist and right-wing. Dieuwe read out a satirical BabylonBee take about the pups rounding up commies.

Fireman Paul became famous during the recent bushfires in Australia for swearing at Scott Morison during an exhausted outburst on television. He was praised by leftists, until they found out that he was a Pauline Hanson One Nation supporter.

The Serious Fraud Office in New Zealand is now investigating both the National Party and NZ First. The former has two $100,000 donations under scrutiny, at least one of which was funneled from a CCP connected businessman. The latter has a foundation that is suspected to not have handled party donations properly and used it to hide the names of large donors.

Winston Peters ignited legacy media outrage after he shared photos taken of a journalist meeting with a former party president suspected of leaking information. These photos were published by The BFD, which is a non-partisan media organisation run by "SB". Even though the website has contributors that support nearly every major party (other than the Greens), the legacy media and others have accused it of being under the control of NZ First and even labelled it a "far right" website. Journalists have hilariously labelled the taking and sharing of these photos an "ethical dilemma", because it's only fine when they do it.

Holden has announced they are leaving Australia and New Zealand for good. Many questions have been left unanswered, but it's possible they threw a fit about not getting enough subsidies and bailouts that were supported by leftists.

All that and much more was discussed on this episode of Trans-Tasman Talk. Tune in next week at the usual time on Tuesday to join in the live chat.