Andrew Little described them as "sick" and "extreme", Jacinda said it was not a legitimate way to express your views, David Seymour described it as "odious", and Amy Adams condemns it as “psychological abuse and torture”.

What is it that shocked these politicians into issuing condemnation? 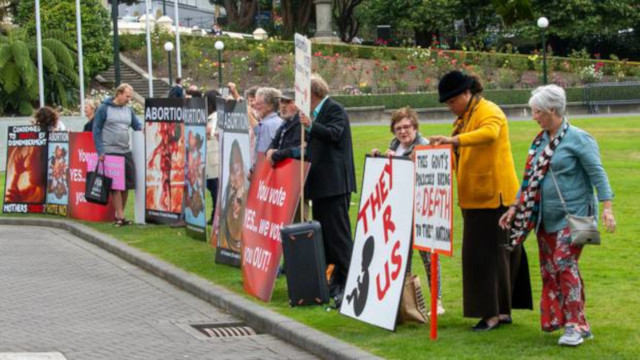 Due to a procedural accident and some effort from the aforementioned Seymour, the legality of such protests around abortion mills will remain legal for now. A few days earlier I had been at the March For Life in Auckland, with around 3,500 marchers and attendees. The amount of media coverage was minimal, outside of a short social media video report.

The obvious contrast between these two protests is this: a dozen men and women with signs triggered a far greater reaction than a march of thousands of people. Many legacy media propaganda outlets even censored the photos, although they're at the mild end of showing the true horrific reality of abortion.

I've echoed Canadian anti-abortion activist Laura Klassen's thoughts on some of the common pro-life platitudes before, but the main tagline of the March For Life was a solid one: "life begins at conception, no exceptions." There were several public confessions from those who had been involved in abortions, leaving the audience in tears. There was the occasional attempt to inject a bit too much levity and positivity, and some stronger words were missing even when the heavy subtext was there. The crowd, speakers, and organisers were overwhelmingly Christian, and always will be. There was public prayer and a Samoan church choir. Yet the organising groups were overwhelmingly secular and while the organisers did an amazing job, I left realising that this country really needs church-based organisations that will teach Christians how to take more meaningful and Biblical action. It's clear, only unfettered Christianity can end child sacrifice.

After 44 years, mere pro-lifeism has lost the war and we need those who can train Christians on how to agitate against abortion in the way that churches fought and ended slavery two centuries ago.

A dozen agitators with the right signs demanded reactions from both high-priestess Jacinda Ardern and high-priest Andrew Little.

I've now seen numerous press releases from churches condemning the abortion bill that just passed into law. It's great to see them respond in horror to what is happening. Yet 500,000 babies have been slaughtered while they slept for 44 years. Will you repent and remain awake or will you return to your slumber?

Here's the thing: everything that all the pro-life groups and churches complained about in this bill have been happening in this country for over four decades. Why be surprised that it was all made a bit easier this week?

There was much noise in parliament around arguing pedantics like the gestational stage at which it's OK to kill babies, the level of disability required for genetic cleansing, whether the victim requires painkillers, or whether murderers should be required to give medical care to victims who survive the first attempt on their life. Of course MPs voted against a provision to provide medical care to abortion survivors! You don't let your sacrificial offerings off the altar if you fail with the first blow of the knife. The pro-aborts don't even take the opposition seriously, and why would they? If abortion isn't murder, then there's nothing wrong with it. If there should be exceptions to it or regulations around it, then it can't be inherently evil.

That was one angle in the debate that everyone seems to get except for the pro-life MPs and PR agents. I've been saying it from day one. It's not about this bill. It's never been about this bill.

Deep down, we all know it. Here's an example: Voice For Life quoted abolitionist William Wilberforce in response to high priest Andrew Little: 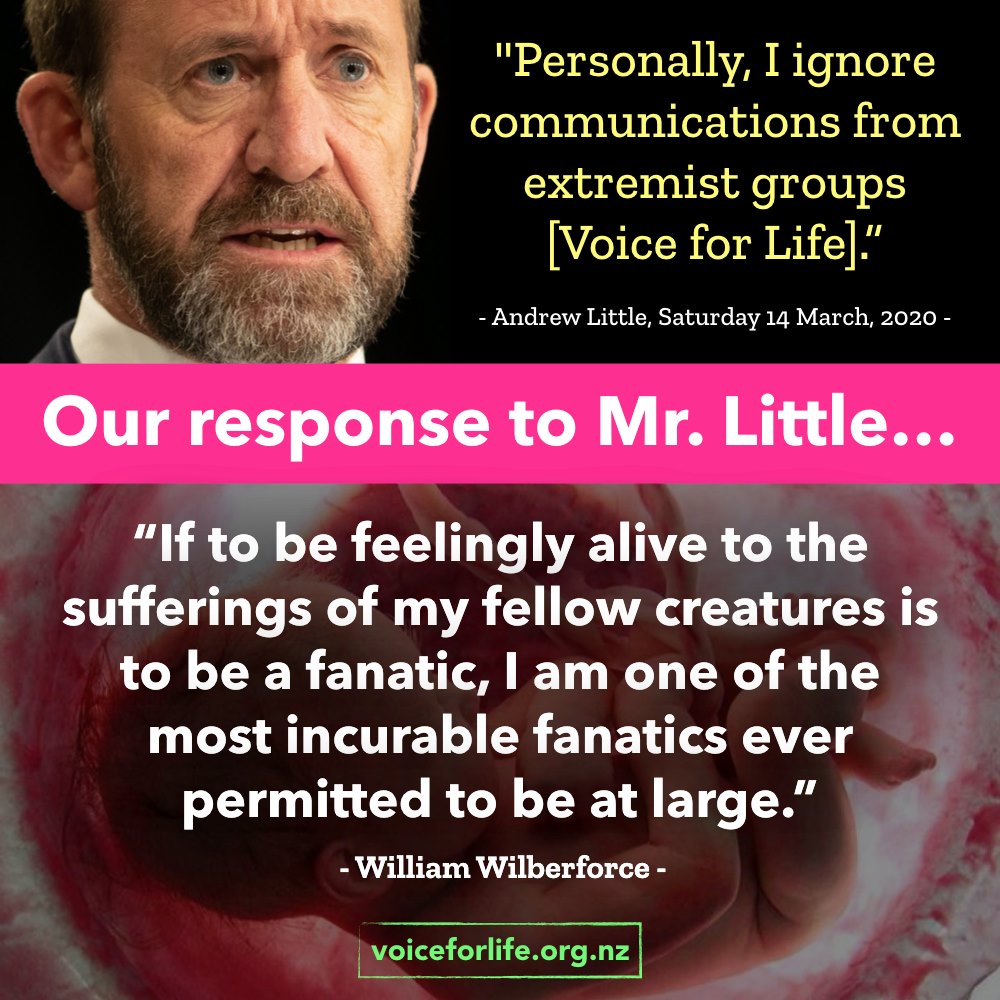 Wilberforce didn't hide behind platitudes about trying to sanitise the slave trade. He didn't focus his efforts on increasing the bureaucratic regulations around the slave trade. Rather than try to obfuscate his true intentions, he was bold and open in pursuing his ultimate goal.

Andrew Little is responsible for the expansion of the ongoing largest mass-murder this country is ever likely to see. No one fears the truth more than he, as can be evidenced by his reaction to those who expose him to it, his desire to ban abortion protests, and his upcoming attempts to jail those who might have had a bit too much to think.

The bill had passed behind closed doors long before it was revealed to the public, so Christians should instead focus on organising an effective protest movement while keep the messaging simple and the goals clear.

Abortion must be abolished.

There is forgiveness in Jesus Christ.